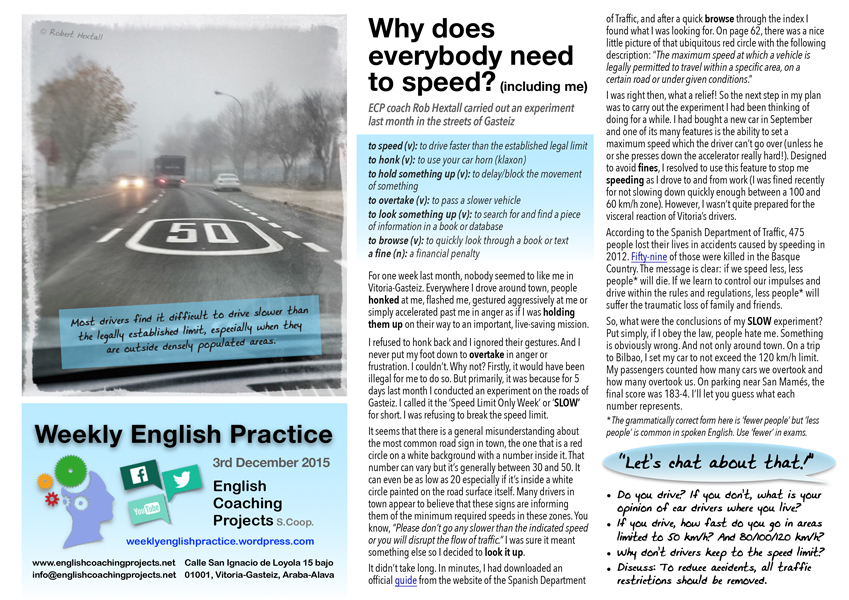 to speed (v): to drive faster than the established legal limit

to hold something up (v): to delay/block the movement of something

to overtake (v): to pass a slower vehicle

to look something up (v): to search for and find a piece of information in a book or database

to browse (v): to quickly look through a book or text

a fine (n): a financial penalty

For one week last month, nobody seemed to like me in Vitoria-Gasteiz. Everywhere I drove around town, people honked at me, flashed me, gestured aggressively at me or simply accelerated past me in anger as if I was holding them up on their way to an important, live-saving mission.

I refused to honk back and I ignored their gestures. And I never put my foot down to overtake in anger or frustration. I couldn’t. Why not? Firstly, it would have been illegal for me to do so. But primarily, it was because for 5 days last month I conducted an experiment on the roads of Gasteiz. I called it the ‘Speed Limit Only Week’ or ‘SLOW’ for short. I was refusing to break the speed limit.

It seems that there is a general misunderstanding about the most common road sign in town, the one that is a red circle on a white background with a number inside it. That number can vary but it’s generally between 30 and 50. It can even be as low as 20 especially if it’s inside a white circle painted on the road surface itself. Many drivers in town appear to believe that these signs are informing them of the minimum required speeds in these zones. You know, “Please don’t go any slower than the indicated speed or you will disrupt the flow of traffic.” I was sure it meant something else so I decided to look it up.

It didn’t take long. In minutes, I had downloaded an official guide from the website of the Spanish Department of Traffic, and after a quick browse through the index I found what I was looking for. On page 62, there was a nice little picture of that ubiquitous red circle with the following description: “The maximum speed at which a vehicle is legally permitted to travel within a specific area, on a certain road or under given conditions.”

I was right then, what a relief! So the next step in my plan was to carry out the experiment I had been thinking of doing for a while. I had bought a new car in September and one of its many features is the ability to set a maximum speed which the driver can’t go over (unless he or she presses down the accelerator really hard!). Designed to avoid fines, I resolved to use this feature to stop me speeding as I drove to and from work (I was fined recently for not slowing down quickly enough between a 100 and 60 km/h zone). However, I wasn’t quite prepared for the visceral reaction of Vitoria’s drivers.

According to the Spanish Department of Traffic, 475 people lost their lives in accidents caused by speeding in 2012. Fifty-nine of those were killed in the Basque Country. The message is clear: if we speed less, less people* will die. If we learn to control our impulses and drive within the rules and regulations, less people* will suffer the traumatic loss of family and friends.

So, what were the conclusions of my SLOW experiment? Put simply, if I obey the law, people hate me. Something is obviously wrong. And not only around town. On a trip to Bilbao, I set my car to not exceed the 120 km/h limit. My passengers counted how many cars we overtook and how many overtook us. On parking near San Mamés, the final score was 183-4. I’ll let you guess what each number represents.

* The grammatically correct form here is ‘fewer people’ but ‘less people’ is common in spoken English. Use ‘fewer’ in exams.