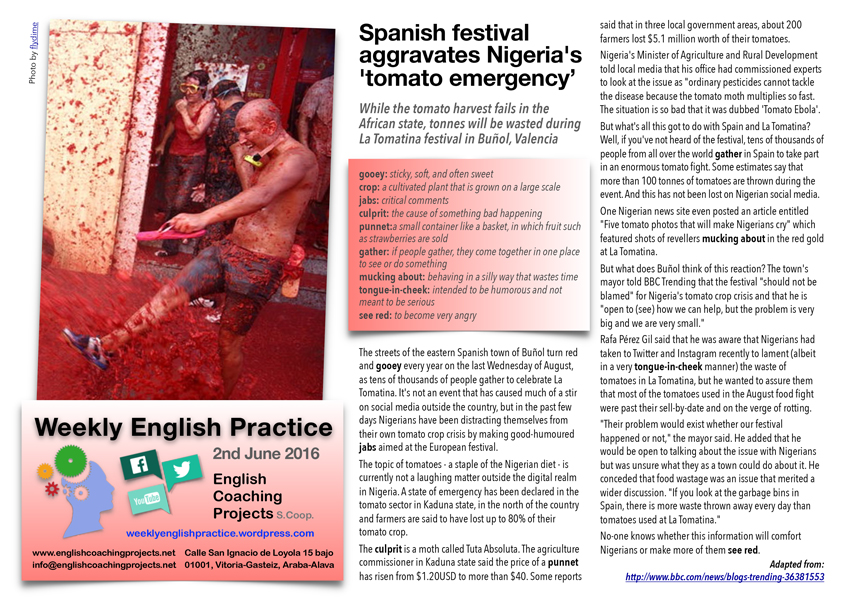 While the tomato harvest fails in the African state, tonnes will be wasted during La Tomatina festival in Buñol, Valencia

crop: a cultivated plant that is grown on a large scale

culprit: the cause of something bad happening

punnet:a small container like a basket, in which fruit such as strawberries are sold

gather: if people gather, they come together in one place to see or do something

mucking about: behaving in a silly way that wastes time

tongue-in-cheek: intended to be humorous and not meant to be serious

The streets of the eastern Spanish town of Buñol turn red and gooey every year on the last Wednesday of August, as tens of thousands of people gather to celebrate La Tomatina. It’s not an event that has caused much of a stir on social media outside the country, but in the past few days Nigerians have been distracting themselves from their own tomato crop crisis by making good-humoured jabs aimed at the European festival.

The topic of tomatoes – a staple of the Nigerian diet – is currently not a laughing matter outside the digital realm in Nigeria. A state of emergency has been declared in the tomato sector in Kaduna state, in the north of the country and farmers are said to have lost up to 80% of their tomato crop.

The culprit is a moth called Tuta Absoluta. The agriculture commissioner in Kaduna state said the price of a punnet has risen from $1.20USD to more than $40. Some reports said that in three local government areas, about 200 farmers lost $5.1 million worth of their tomatoes.

Nigeria’s Minister of Agriculture and Rural Development told local media that his office had commissioned experts to look at the issue as “ordinary pesticides cannot tackle the disease because the tomato moth multiplies so fast. The situation is so bad that it was dubbed ‘Tomato Ebola’.

But what’s all this got to do with Spain and La Tomatina? Well, if you’ve not heard of the festival, tens of thousands of people from all over the world gather in Spain to take part in an enormous tomato fight. Some estimates say that more than 100 tonnes of tomatoes are thrown during the event. And this has not been lost on Nigerian social media.

One Nigerian news site even posted an article entitled “Five tomato photos that will make Nigerians cry” which featured shots of revellers mucking about in the red gold at La Tomatina.

But what does Buñol think of this reaction? The town’s mayor told BBC Trending that the festival “should not be blamed” for Nigeria’s tomato crop crisis and that he is “open to (see) how we can help, but the problem is very big and we are very small.”

Rafa Pérez Gil said that he was aware that Nigerians had taken to Twitter and Instagram recently to lament (albeit in a very tongue-in-cheek manner) the waste of tomatoes in La Tomatina, but he wanted to assure them that most of the tomatoes used in the August food fight were past their sell-by-date and on the verge of rotting.

“Their problem would exist whether our festival happened or not,” the mayor said. He added that he would be open to talking about the issue with Nigerians but was unsure what they as a town could do about it. He conceded that food wastage was an issue that merited a wider discussion. “If you look at the garbage bins in Spain, there is more waste thrown away every day than tomatoes used at La Tomatina.”

No-one knows whether this information will comfort Nigerians or make more of them see red.