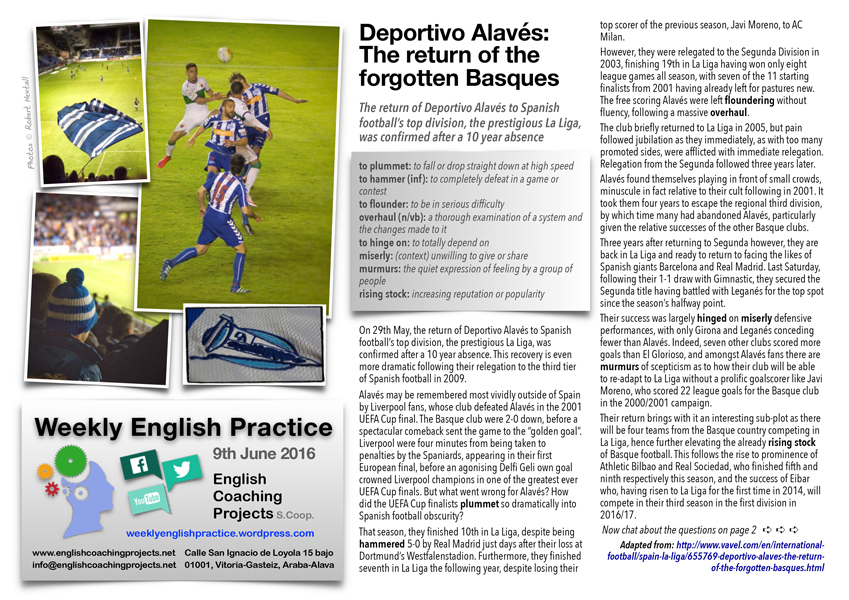 The return of Deportivo Alavés to Spanish football’s top division, the prestigious La Liga, was confirmed after a 10 year absence

to plummet: to fall or drop straight down at high speed

to hammer (inf): to completely defeat in a game or contest

to flounder: to be in serious difficulty

overhaul (n/vb): a thorough examination of a system and the changes made to it

to hinge on: to totally depend on

murmurs: the quiet expression of feeling by a group of people

On 29th May, the return of Deportivo Alavés to Spanish football’s top division, the prestigious La Liga, was confirmed after a 10 year absence. This recovery is even more dramatic following their relegation to the third tier of Spanish football in 2009.

Alavés may be remembered most vividly outside of Spain by Liverpool fans, whose club defeated Alavés in the 2001 UEFA Cup final. The Basque club were 2-0 down, before a spectacular comeback sent the game to the “golden goal”. Liverpool were four minutes from being taken to penalties by the Spaniards, appearing in their first European final, before an agonising Delfi Geli own goal crowned Liverpool champions in one of the greatest ever UEFA Cup finals. But what went wrong for Alavés? How did the UEFA Cup finalists plummet so dramatically into Spanish football obscurity?

That season, they finished 10th in La Liga, despite being hammered 5-0 by Real Madrid just days after their loss at Dortmund’s Westfalenstadion. Furthermore, they finished seventh in La Liga the following year, despite losing their top scorer of the previous season, Javi Moreno, to AC Milan.

However, they were relegated to the Segunda Division in 2003, finishing 19th in La Liga having won only eight league games all season, with seven of the 11 starting finalists from 2001 having already left for pastures new. The free scoring Alavés were left floundering without fluency, following a massive overhaul.

The club briefly returned to La Liga in 2005, but pain followed jubilation as they immediately, as with too many promoted sides, were afflicted with immediate relegation. Relegation from the Segunda followed three years later.

Alavés found themselves playing in front of small crowds, minuscule in fact relative to their cult following in 2001. It took them four years to escape the regional third division, by which time many had abandoned Alavés, particularly given the relative successes of the other Basque clubs.

Three years after returning to Segunda however, they are back in La Liga and ready to return to facing the likes of Spanish giants Barcelona and Real Madrid. Last Saturday, following their 1-1 draw with Gimnastic, they secured the Segunda title having battled with Leganés for the top spot since the season’s halfway point.

Their success was largely hinged on miserly defensive performances, with only Girona and Leganés conceding fewer than Alavés. Indeed, seven other clubs scored more goals than El Glorioso, and amongst Alavés fans there are murmurs of scepticism as to how their club will be able to re-adapt to La Liga without a prolific goalscorer like Javi Moreno, who scored 22 league goals for the Basque club in the 2000/2001 campaign.

Their return brings with it an interesting sub-plot as there will be four teams from the Basque country competing in La Liga, hence further elevating the already rising stock of Basque football. This follows the rise to prominence of Athletic Bilbao and Real Sociedad, who finished fifth and ninth respectively this season, and the success of Eibar who, having risen to La Liga for the first time in 2014, will compete in their third season in the first division in 2016/17.