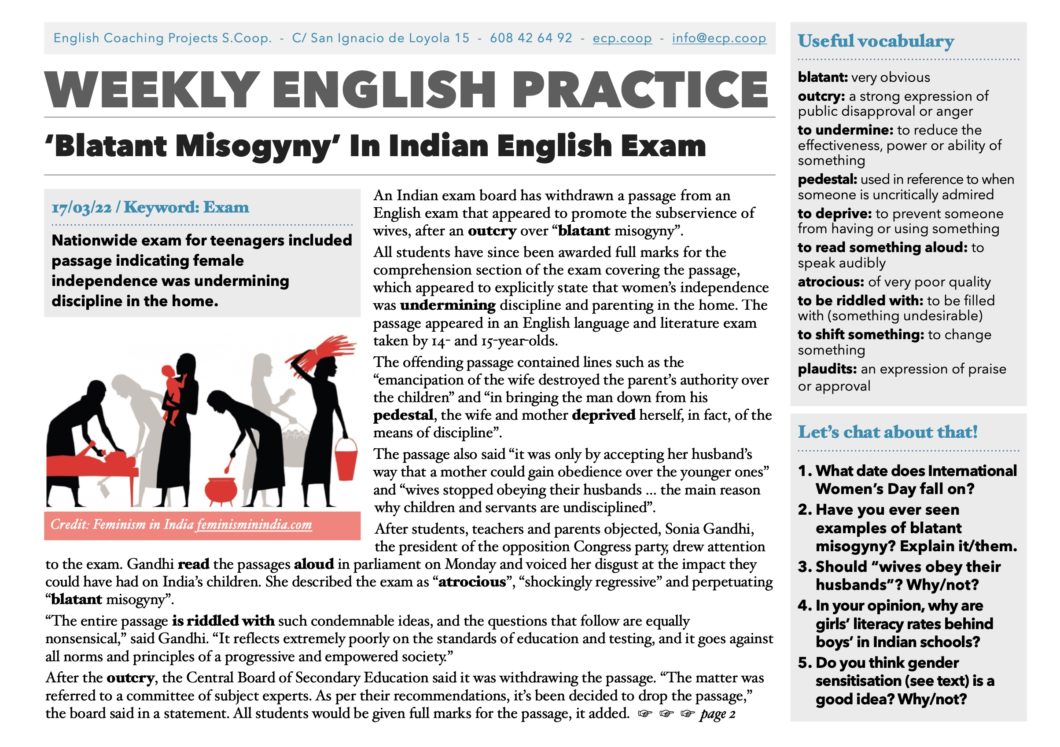 outcry: a strong expression of public disapproval or anger

to undermine: to reduce the effectiveness, power or ability of something

pedestal: used in reference to when someone is uncritically admired

to deprive: to prevent someone from having or using something

to read something aloud: to speak audibly

to be riddled with: to be filled with (something undesirable)

to shift something: to change something

plaudits: an expression of praise or approval

An Indian exam board has withdrawn a passage from an English exam that appeared to promote the subservience of wives, after an outcry over “blatant misogyny”.

All students have since been awarded full marks for the comprehension section of the exam covering the passage, which appeared to explicitly state that women’s independence was undermining discipline and parenting in the home. The passage appeared in an English language and literature exam taken by 14- and 15-year-olds.

The offending passage contained lines such as the “emancipation of the wife destroyed the parent’s authority over the children” and “in bringing the man down from his pedestal, the wife and mother deprived herself, in fact, of the means of discipline”.

The passage also said “it was only by accepting her husband’s way that a mother could gain obedience over the younger ones” and “wives stopped obeying their husbands … the main reason why children and servants are undisciplined”.

After students, teachers and parents objected, Sonia Gandhi, the president of the opposition Congress party, drew attention to the exam. Gandhi read the passages aloud in parliament on Monday and voiced her disgust at the impact they could have had on India’s children. She described the exam as “atrocious”, “shockingly regressive” and perpetuating “blatant misogyny”.

“The entire passage is riddled with such condemnable ideas, and the questions that follow are equally nonsensical,” said Gandhi. “It reflects extremely poorly on the standards of education and testing, and it goes against all norms and principles of a progressive and empowered society.”

After the outcry, the Central Board of Secondary Education said it was withdrawing the passage. “The matter was referred to a committee of subject experts. As per their recommendations, it’s been decided to drop the passage,” the board said in a statement. All students would be given full marks for the passage, it added.

Gandhi demanded a review of the exam in question and also called for a broader investigation into gender sensitivity standards in the national curriculum.

Although the number of girls attending school in India continues to rise, the literacy rate of those aged 15 is still behind that of boys, at 59.3% compared to 78.8%.

The national curriculum has often been accused of perpetuating rigid stereotypes. However, there have been some attempts to shift perceptions. In March this year, in the state of Punjab, a “gender sensitisation” curriculum was introduced for children aged from 10 to 14 to try to challenge gender norms. In 2018, a school in Kochi in the southern state of Kerala won plaudits after it became the first to introduce gender-neutral uniforms.

Adapted from this article from theguardian.com by ECP coach Darren “Kez” Kurien

How Men Slowed Down Rolling Luggage