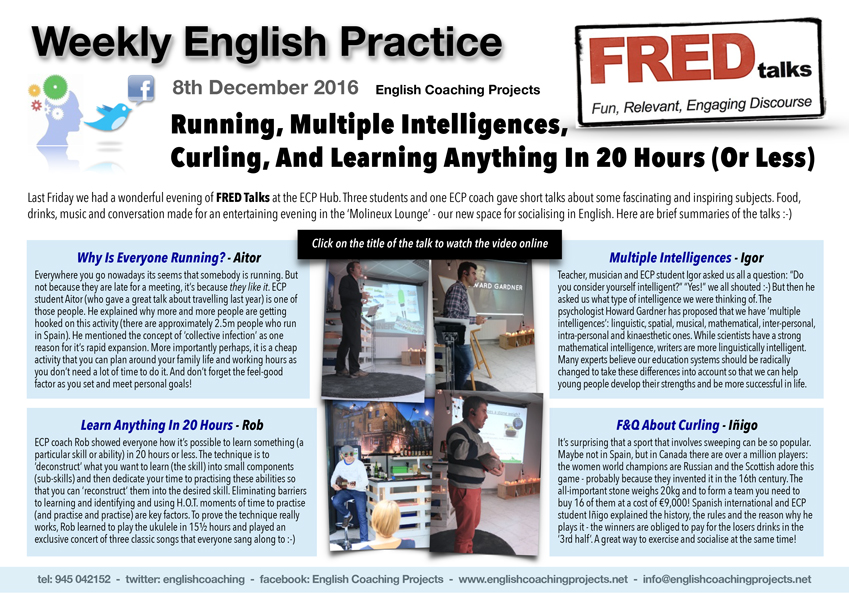 Running, Multiple Intelligences, Curling, And Learning Anything In 20 Hours (Or Less)

Last Friday we had a wonderful evening of FRED Talks at the ECP Hub. Three students and one ECP coach gave short talks about some fascinating and inspiring subjects. Food, drinks, music and conversation made for an entertaining evening in the ‘Molineux Lounge’ – our new space for socialising in English. Here are brief summaries of the talks (click on the links to watch the videos).

Why Is Everyone Running? – Aitor

Everywhere you go nowadays its seems that somebody is running. But not because they are late for a meeting, it’s because they like it. ECP student Aitor (who gave a great talk about travelling last year) is one of those people. He explained why more and more people are getting hooked on this activity (there are approximately 2.5m people who run in Spain). He mentioned the concept of ‘collective infection’ as one reason for it’s rapid expansion. More importantly perhaps, it is a cheap activity that you can plan around your family life and working hours as you don’t need a lot of time to do it. And don’t forget the feel-good factor as you set and meet personal goals!

Teacher, musician and ECP student Igor asked us all a question: “Do you consider yourself intelligent?” “Yes!” we all shouted 🙂 But then he asked us what type of intelligence we were thinking of. The psychologist Howard Gardner has proposed that we have ‘multiple intelligences’: linguistic, spatial, musical, mathematical, inter-personal, intra-personal and kinaesthetic ones. While scientists have a strong mathematical intelligence, writers are more linguistically intelligent. Many experts believe our education systems should be radically changed to take these differences into account so that we can help young people develop their strengths and be more successful in life.

It’s surprising that a sport that involves sweeping can be so popular. Maybe not in Spain, but in Canada there are over a million players: the women world champions are Russian and the Scottish adore this game – probably because they invented it in the 16th century. The all-important stone weighs 20kg and to form a team you need to buy 16 of them at a cost of €9,000! Spanish international and ECP student Iñigo explained the history, the rules and the reason why he plays it – the winners are obliged to pay for the losers drinks in the ‘3rd half’. A great way to exercise and socialise at the same time!

Learn Anything In 20 Hours – Rob

ECP coach Rob showed everyone how it’s possible to learn something (a particular skill or ability) in 20 hours or less. The technique is to ‘deconstruct’ what you want to learn (the skill) into small components (sub-skills) and then dedicate your time to practising these abilities so that you can ‘reconstruct’ them into the desired skill. Eliminating barriers to learning and identifying and using H.O.T. moments of time to practise (and practise and practise) are key factors. To prove the technique really works, Rob learned to play the ukulele in 15½ hours and played an exclusive concert of three classic songs that everyone sang along to 🙂

LEARN ANYTHING IN 20 HOURS