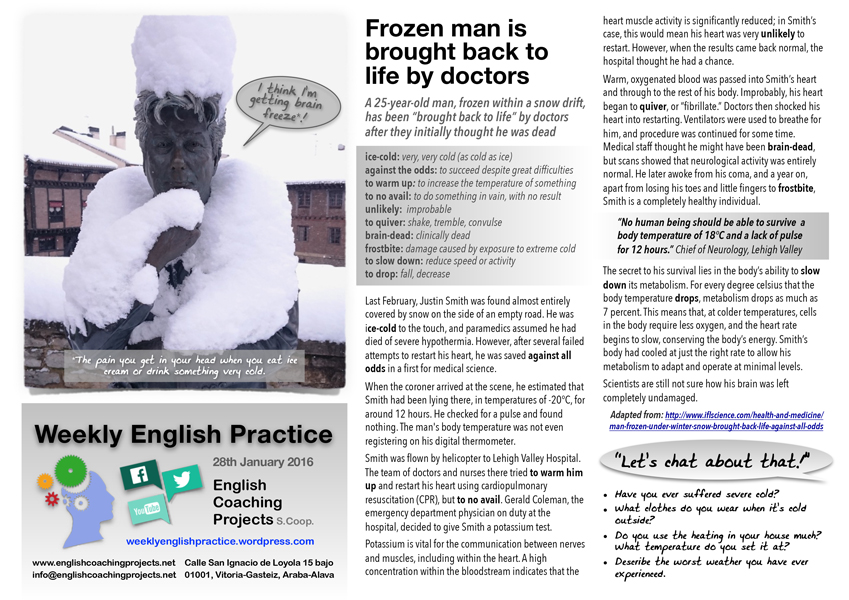 A 25-year-old man, frozen within a snow drift, has been “brought back to life” by doctors after they initially thought he was dead

against the odds: to succeed despite great difficulties

to warm up: to increase the temperature of something

to no avail: to do something in vain, with no result

to slow down: reduce speed or activity

Last February, Justin Smith was found almost entirely covered by snow on the side of an empty road. He was ice-cold to the touch, and paramedics assumed he had died of severe hypothermia. However, after several failed attempts to restart his heart, he was saved against all odds in a first for medical science.

When the coroner arrived at the scene, he estimated that Smith had been lying there, in temperatures of -20°C, for around 12 hours. He checked for a pulse and found nothing. The man’s body temperature was not even registering on his digital thermometer.

Smith was flown by helicopter to Lehigh Valley Hospital. The team of doctors and nurses there tried to warm him up and restart his heart using cardiopulmonary resuscitation (CPR), but to no avail. Gerald Coleman, the emergency department physician on duty at the hospital, decided to give Smith a potassium test.

Potassium is vital for the communication between nerves and muscles, including within the heart. A high concentration within the bloodstream indicates that the heart muscle activity is significantly reduced; in Smith’s case, this would mean his heart was very unlikely to restart. However, when the results came back normal, the hospital thought he had a chance.

Warm, oxygenated blood was passed into Smith’s heart and through to the rest of his body. Improbably, his heart began to quiver, or “fibrillate.” Doctors then shocked his heart into restarting. Ventilators were used to breathe for him, and procedure was continued for some time. Medical staff thought he might have been brain-dead, but scans showed that neurological activity was entirely normal. He later awoke from his coma, and a year on, apart from losing his toes and little fingers to frostbite, Smith is a completely healthy individual.

“No human being should be able to survive  a body temperature of 18°C and a lack of pulse for 12 hours.” Chief of Neurology, Lehigh Valley

The secret to his survival lies in the body’s ability to slow down its metabolism. For every degree celsius that the body temperature drops, metabolism drops as much as 7 percent. This means that, at colder temperatures, cells in the body require less oxygen, and the heart rate begins to slow, conserving the body’s energy. Smith’s body had cooled at just the right rate to allow his metabolism to adapt and operate at minimal levels.

Scientists are still not sure how his brain was left completely undamaged.