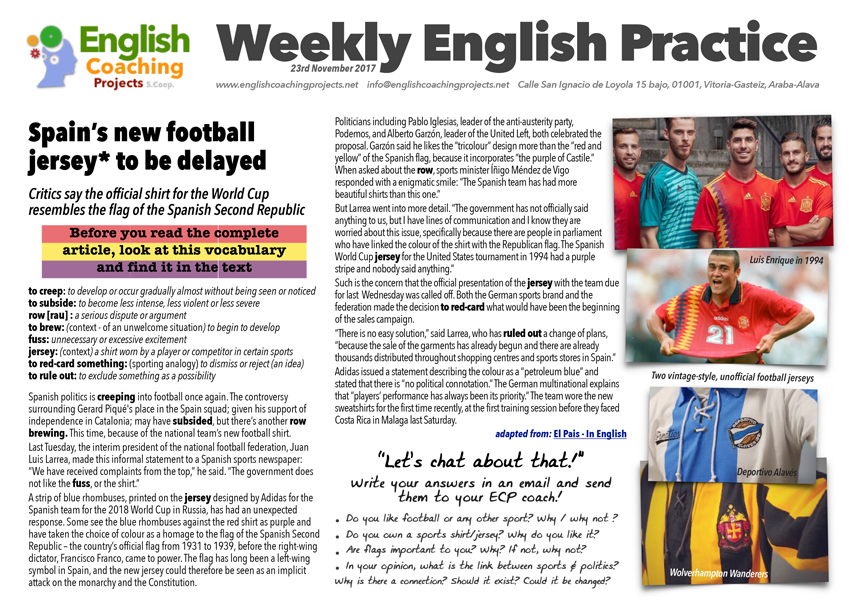 to creep: to develop or occur gradually almost without being seen or noticed

to brew: (context – of an unwelcome situation) to begin to develop

jersey: (context) a shirt worn by a player or competitor in certain sports

to red-card something: (sporting analogy) to dismiss or reject (an idea)

to rule out: to exclude something as a possibility

Spanish politics is creeping into football once again. The controversy surrounding Gerard Piqué’s place in the Spain squad; given his support of independence in Catalonia; may have subsided, but there’s another row brewing. This time, because of the national team’s new football shirt.

Last Tuesday, the interim president of the national football federation, Juan Luis Larrea, made this informal statement to a Spanish sports newspaper: “We have received complaints from the top,” he said. “The government does not like the fuss, or the shirt.”

A strip of blue rhombuses, printed on the jersey designed by Adidas for the Spanish team for the 2018 World Cup in Russia, has had an unexpected response. Some see the blue rhombuses against the red shirt as purple and have taken the choice of colour as a homage to the flag of the Spanish Second Republic – the country’s official flag from 1931 to 1939, before the right-wing dictator, Francisco Franco, came to power. The flag has long been a left-wing symbol in Spain, and the new jersey could therefore be seen as an implicit attack on the monarchy and the Constitution.

Politicians including Pablo Iglesias, leader of the anti-austerity party, Podemos, and Alberto Garzón, leader of the United Left, both celebrated the proposal. Garzón said he likes the “tricolour” design more than the “red and yellow” of the Spanish flag, because it incorporates “the purple of Castile.” When asked about the row, sports minister Íñigo Méndez de Vigo responded with a enigmatic smile: “The Spanish team has had more beautiful shirts than this one.”

But Larrea went into more detail. “The government has not officially said anything to us, but I have lines of communication and I know they are worried about this issue, specifically because there are people in parliament who have linked the colour of the shirt with the Republican flag. The Spanish World Cup jersey for the United States tournament in 1994 had a purple stripe and nobody said anything.”

Such is the concern that the official presentation of the jersey with the team due for last  Wednesday was called off. Both the German sports brand and the federation made the decision to red-card what would have been the beginning of the sales campaign.

“There is no easy solution,” said Larrea, who has ruled out a change of plans, “because the sale of the garments has already begun and there are already thousands distributed throughout shopping centres and sports stores in Spain.”

Adidas issued a statement describing the colour as a “petroleum blue” and stated that there is “no political connotation.” The German multinational explains that “players’ performance has always been its priority.” The team wore the new sweatshirts for the first time recently, at the first training session before they faced Costa Rica in Malaga last Saturday.

Adapted from: El Pais – In English