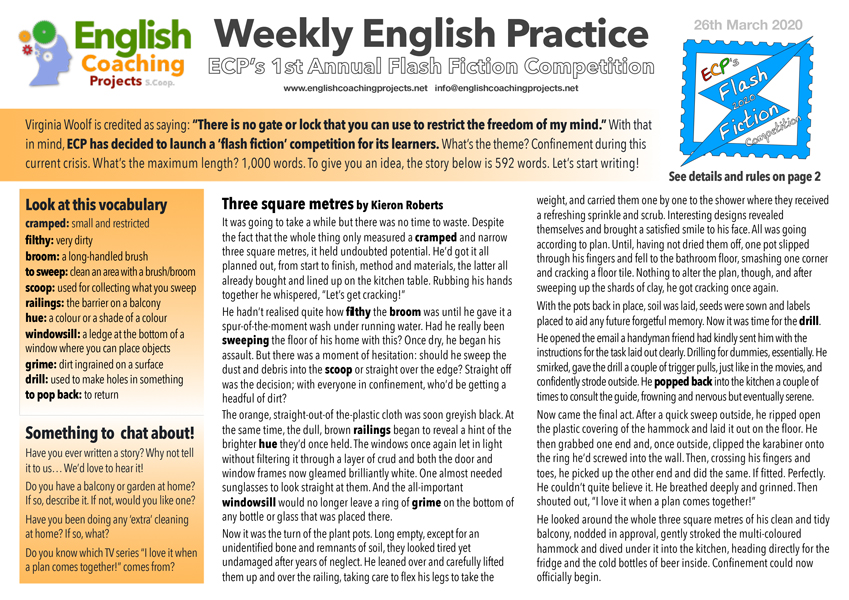 ECP has decided to launch a ‘flash fiction’ competition for its learners. What’s the theme? Confinement during this current crisis. What’s the maximum length? 1,000 words. To give you an idea, the story below is 592 words. Let’s start writing! The rules are here.

to sweep: clean an area with a brush/broom

scoop: used for collecting what you sweep

railings: the barrier on a balcony

hue: a colour or a shade of a colour

windowsill: a ledge at the bottom of a window where you can place objects

grime: dirt ingrained on a surface

drill: used to make holes in something

to pop back: to return

It was going to take a while but there was no time to waste. Despite the fact that the whole thing only measured a cramped and narrow three square metres, it held undoubted potential. He’d got it all planned out, from start to finish, method and materials, the latter all already bought and lined up on the kitchen table. Rubbing his hands together he whispered, “Let’s get cracking!”

He hadn’t realised quite how filthy the broom was until he gave it a spur-of-the-moment wash under running water. Had he really been sweeping the floor of his home with this? Once dry, he began his assault. But there was a moment of hesitation: should he sweep the dust and debris into the scoop or straight over the edge? Straight off was the decision; with everyone in confinement, who’d be getting a headful of dirt?

The orange, straight-out-of the-plastic cloth was soon greyish black. At the same time, the dull, brown railings began to reveal a hint of the brighter hue they’d once held. The windows once again let in light without filtering it through a layer of crud and both the door and window frames now gleamed brilliantly white. One almost needed sunglasses to look straight at them. And the all-important windowsill would no longer leave a ring of grime on the bottom of any bottle or glass that was placed there.

Now it was the turn of the plant pots. Long empty, except for an unidentified bone and remnants of soil, they looked tired yet undamaged after years of neglect. He leaned over and carefully lifted them up and over the railing, taking care to flex his legs to take the weight, and carried them one by one to the shower where they received a refreshing sprinkle and scrub. Interesting designs revealed themselves and brought a satisfied smile to his face. All was going according to plan. Until, having not dried them off, one pot slipped through his fingers and fell to the bathroom floor, smashing one corner and cracking a floor tile. Nothing to alter the plan, though, and after sweeping up the shards of clay, he got cracking once again.

With the pots back in place, soil was laid, seeds were sown and labels placed to aid any future forgetful memory. Now it was time for the drill.

He opened the email a handyman friend had kindly sent him with the instructions for the task laid out clearly. Drilling for dummies, essentially. He smirked, gave the drill a couple of trigger pulls, just like in the movies, and confidently strode outside. He popped back into the kitchen a couple of times to consult the guide, frowning and nervous but eventually serene.

Now came the final act. After a quick sweep outside, he ripped open the plastic covering of the hammock and laid it out on the floor. He then grabbed one end and, once outside, clipped the karabiner onto the ring he’d screwed into the wall. Then, crossing his fingers and toes, he picked up the other end and did the same. If fitted. Perfectly. He couldn’t quite believe it. He breathed deeply and grinned. Then shouted out, “I love it when a plan comes together!”

He looked around the whole three square metres of his clean and tidy balcony, nodded in approval, gently stroked the multi-coloured hammock and dived under it into the kitchen, heading directly for the fridge and the cold bottles of beer inside. Confinement could now officially begin.

Something to chat about!

Send put opinions to your ECP via email or WhatsApp

Have you ever written a story? Why not tell it to us… We’d love to hear it!

Do you have a balcony or garden at home? If so, describe it. If not, would you like one?

Have you been doing any ‘extra’ cleaning at home? If so, what?

Do you know which TV series “I love it when a plan comes together!” comes from?