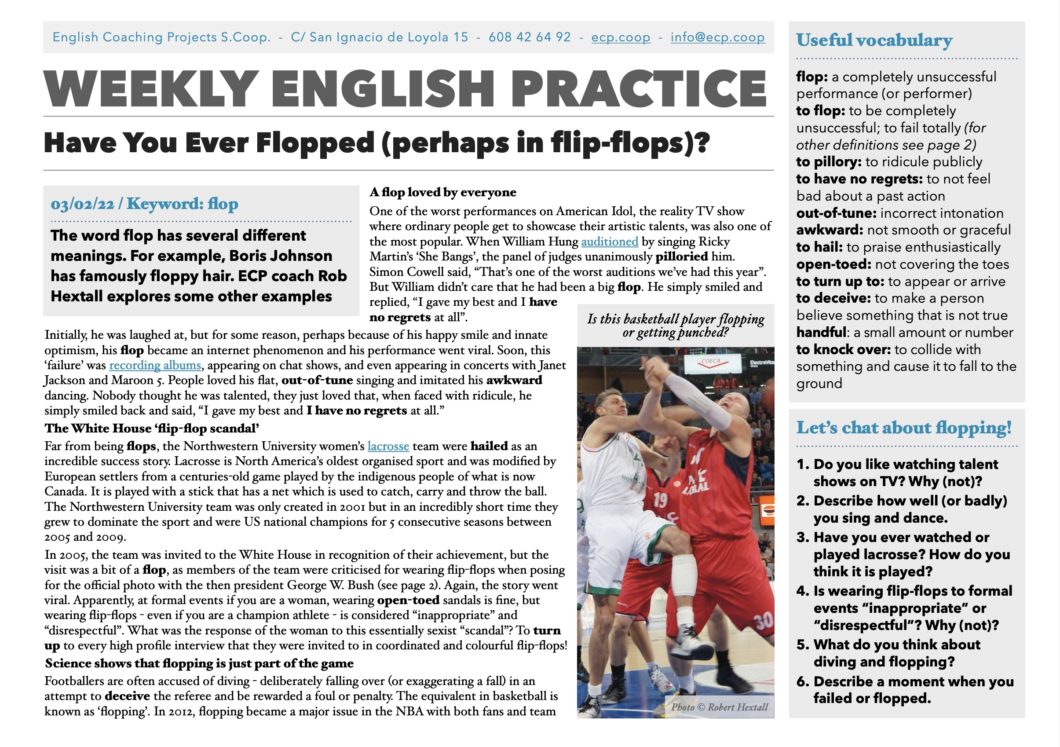 Have You Ever Flopped (perhaps in flip-flops)?

to flop: to be completely unsuccessful; to fail totally (for other definitions see page 2 of the PDF)

to pillory: to ridicule publicly

to have no regrets: to not feel bad about a past action

awkward: not smooth or graceful

to hail: to praise enthusiastically

open-toed: not covering the toes

to turn up to: to appear or arrive

to deceive: to make a person believe something that is not true

handful: a small amount or number

to knock over: to collide with something and cause it to fall to the ground

englishcoachingprojects · Have You Ever Flopped?

A flop loved by everyone

One of the worst performances on American Idol, the reality TV show where ordinary people get to showcase their artistic talents, was also one of the most popular. When William Hung auditioned by singing Ricky Martin’s ‘She Bangs’, the panel of judges unanimously pilloried him. Simon Cowell said, “That’s one of the worst auditions we’ve had this year”. But William didn’t care that he had been a big flop. He simply smiled and replied, “I gave my best and I have no regrets at all”.

Initially, he was laughed at, but for some reason, perhaps because of his happy smile and innate optimism, his flopbecame an internet phenomenon and his performance went viral. Soon, this ‘failure’ was recording albums, appearing on chat shows, and even appearing in concerts with Janet Jackson and Maroon 5. People loved his flat, out-of-tunesinging and imitated his awkward dancing. Nobody thought he was talented, they just loved that, when faced with ridicule, he simply smiled back and said, “I gave my best and I have no regrets at all.”

Far from being flops, the Northwestern University women’s lacrosse team were hailed as an incredible success story. Lacrosse is North America’s oldest organised sport and was modified by European settlers from a centuries-old game played by the indigenous people of what is now Canada. It is played with a stick that has a net which is used to catch, carry and throw the ball. The Northwestern University team was only created in 2001 but in an incredibly short time they grew to dominate the sport and were US national champions for 5 consecutive seasons between 2005 and 2009.

In 2005, the team was invited to the White House in recognition of their achievement, but the visit was a bit of a flop, as members of the team were criticised for wearing flip-flops when posing for the official photo with the then president George W. Bush (see page 2). Again, the story went viral. Apparently, at formal events if you are a woman, wearing open-toed sandals is fine, but wearing flip-flops – even if you are a champion athlete – is considered “inappropriate” and “disrespectful”. What was the response of the woman to this essentially sexist “scandal”? To turn up to every high profile interview that they were invited to in coordinated and colourful flip-flops!

Science shows that flopping is just part of the game

Footballers are often accused of diving – deliberately falling over (or exaggerating a fall) in an attempt to deceive the referee and be rewarded a foul or penalty. The equivalent in basketball is known as ‘flopping’. In 2012, flopping became a major issue in the NBA with both fans and team owners complaining about the flagrant, theatrical behaviour of a handful of players. Mark Cuban, the billionaire owner of the Dallas Mavericks, decided to employ a team of scientists – specifically biomechanics researchers – to get conclusive, scientific proof that players were cheating.

After over a year of recreating and simulating on-court impacts, the researchers came up with some interesting conclusions. Basically, if your feet are firmly planted on the ground, it is really easy to knock you over. So most ‘flops’ are in fact inevitable falls. What turns a fall into a flop is if you unnecessarily flap and flail your arms as you fall – the natural instinct would be to use them to break your fall and to help you regain balance. However, they noted, exaggerating the movement of your arms doesn’t necessarily mean that it wasn’t a foul in the first place… A foul is a foul, even if the player is guilty of histrionics.

For Mark Cuban, this whole experiment about flopping was basically a flop in itself. He’d hoped to get concrete, scientific proof that showed that flopping was deliberate cheating, but in the end, the science showed that, in fact, it is much easier than we thought to knock a player over. Flapping your arms as you fall might be flopping, but not all flopping is cheating.

Written by ECP coach Rob Hextall  after listening to this podcast by Radiolab.

Let’s chat about flops and flopping!

The ‘Clutch Moments’ of an Interpreter

Women’s football and the ACFF