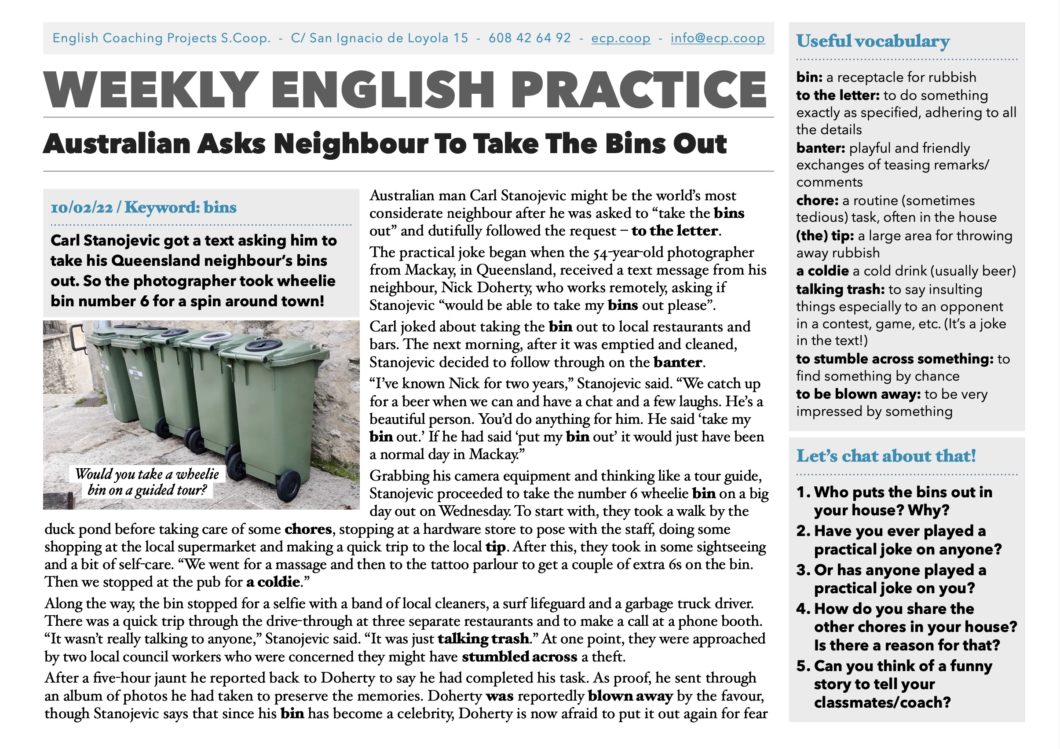 Australian Asks Neighbour To Take The Bins Out

Carl Stanojevic got a text asking him to take his Queensland neighbour’s bins out. So the photographer took wheelie bin number 6 for a spin around town!

bin: a receptacle for rubbish

to the letter: to do something exactly as specified, adhering to all the details

chore: a routine (sometimes tedious) task, often in the house

(the) tip: a large area for throwing away rubbish

talking trash: to say insulting things especially to an opponent in a contest, game, etc. (It’s a joke in the text!)

to stumble across something: to find something by chance

to be blown away: to be very impressed by something

englishcoachingprojects · Take The Bins Out

Carl Stanojevic got a text asking him to take his Queensland neighbour’s bins out. So the photographer took wheelie bin number 6 for a spin around town!

Australian man Carl Stanojevic might be the world’s most considerate neighbour after he was asked to “take the binsout” and dutifully followed the request – to the letter.

The practical joke began when the 54-year-old photographer from Mackay, in Queensland, received a text message from his neighbour, Nick Doherty, who works remotely, asking if Stanojevic “would be able to take my bins out please”.

Carl joked about taking the bin out to local restaurants and bars. The next morning, after it was emptied and cleaned, Stanojevic decided to follow through on the banter.

“I’ve known Nick for two years,” Stanojevic said. “We catch up for a beer when we can and have a chat and a few laughs. He’s a beautiful person. You’d do anything for him. He said ‘take my bin out.’ If he had said ‘put my bin out’ it would just have been a normal day in Mackay.”

Grabbing his camera equipment and thinking like a tour guide, Stanojevic proceeded to take the number 6 wheelie binon a big day out on Wednesday. To start with, they took a walk by the duck pond before taking care of some chores, stopping at a hardware store to pose with the staff, doing some shopping at the local supermarket and making a quick trip to the local tip. After this, they took in some sightseeing and a bit of self-care. “We went for a massage and then to the tattoo parlour to get a couple of extra 6s on the bin. Then we stopped at the pub for a coldie.”

Along the way, the bin stopped for a selfie with a band of local cleaners, a surf lifeguard and a garbage truck driver. There was a quick trip through the drive-through at three separate restaurants and to make a call at a phone booth.“It wasn’t really talking to anyone,” Stanojevic said. “It was just talking trash.” At one point, they were approached by two local council workers who were concerned they might have stumbled across a theft.

After a five-hour jaunt he reported back to Doherty to say he had completed his task. As proof, he sent through an album of photos he had taken to preserve the memories. Doherty was reportedly blown away by the favour, though Stanojevic says that since his bin has become a celebrity, Doherty is now afraid to put it out again for fear it may wander off on another adventure.
“We’ve definitely put a hell of a lot of smiles on people’s faces, but I wasn’t expecting this to go around the world. It’s good that it’s taken the focus off all this heartache with these lockdowns and Covid and that’s the idea of it,” he said.

Let’s chat about bins and other chores!

Serial Killer’s Head in a Jar