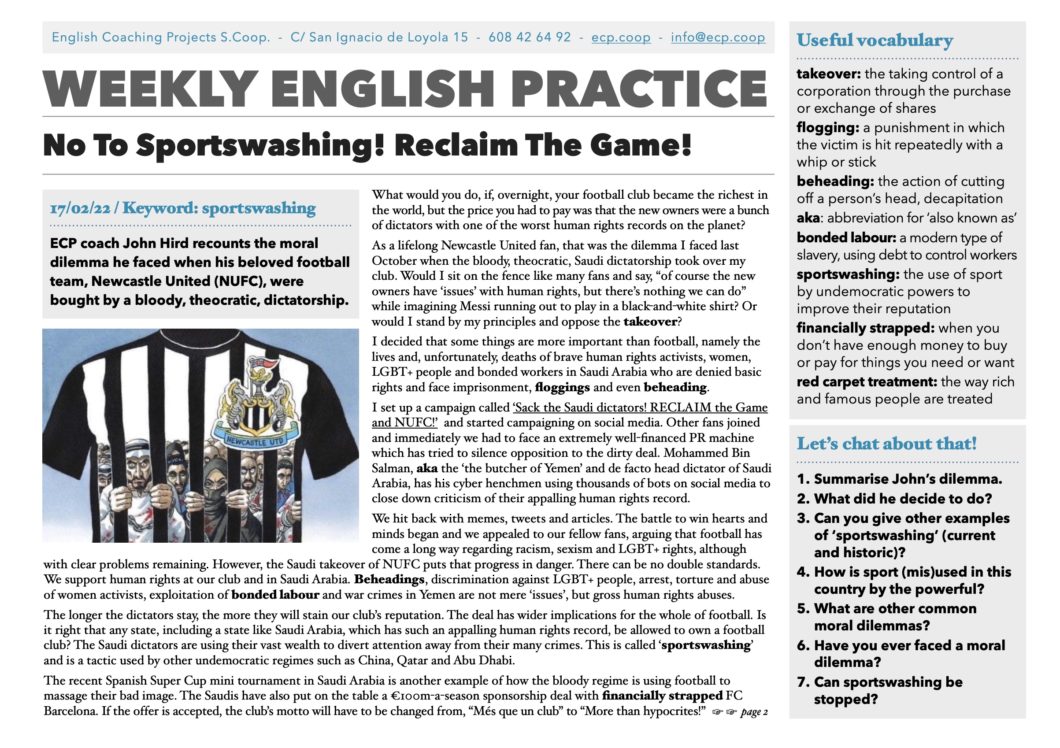 No To Sportswashing! Reclaim The Game!

takeover: the taking control of a corporation through the purchase or exchange of shares

flogging: a punishment in which the victim is hit repeatedly with a whip or stick

beheading: the action of cutting off a person’s head, decapitation

aka: abbreviation for ‘also known as’

sportswashing: the use of sport by undemocratic powers to improve their reputation

financially strapped: when you don’t have enough money to buy or pay for things you need or want

What would you do, if, overnight, your football club became the richest in the world, but the price you had to pay was that the new owners were a bunch of dictators with one of the worst human rights records on the planet?

As a lifelong Newcastle United fan, that was the dilemma I faced last October when the bloody, theocratic, Saudi dictatorship took over my club. Would I sit on the fence like many fans and say, “of course the new owners have ‘issues’ with human rights, but there’s nothing we can do” while imagining Messi running out to play in a black-and-white shirt? Or would I stand by my principles and oppose the takeover?

I decided that some things are more important than football, namely the lives and, unfortunately, deaths of brave human rights activists, women, LGBT+ people and bonded workers in Saudi Arabia who are denied basic rights and face imprisonment, floggings and even beheading.

I set up a campaign called ‘Sack the Saudi dictators! RECLAIM the Game and NUFC!’  and started campaigning on social media. Other fans joined and immediately we had to face an extremely well-financed PR machine which has tried to silence opposition to the dirty deal. Mohammed Bin Salman, aka the ‘the butcher of Yemen’ and de facto head dictator of Saudi Arabia, has his cyber henchmen using thousands of bots on social media to close down criticism of their appalling human rights record.

We hit back with memes, tweets and articles. The battle to win hearts and minds began and we appealed to our fellow fans, arguing that football has come a long way regarding racism, sexism and LGBT+ rights, although with clear problems remaining. However, the Saudi takeover of NUFC puts that progress in danger. There can be no double standards. We support human rights at our club and in Saudi Arabia. Beheadings, discrimination against LGBT+ people, arrest, torture and abuse of women activists, exploitation of bonded labour and war crimes in Yemen are not mere ‘issues’, but gross human rights abuses.

The longer the dictators stay, the more they will stain our club’s reputation. The deal has wider implications for the whole of football. Is it right that any state, including a state like Saudi Arabia, which has such an appalling human rights record, be allowed to own a football club? The Saudi dictators are using their vast wealth to divert attention away from their many crimes. This is called ‘sportswashing’ and is a tactic used by other undemocratic regimes such as China, Qatar and Abu Dhabi.

The recent Spanish Super Cup mini tournament in Saudi Arabia is another example of how the bloody regime is using football to massage their bad image. The Saudis have also put on the table a €100m-a-season sponsorship deal with financially strapped FC Barcelona. If the offer is accepted, the club’s motto will have to be changed from, “Més que un club” to “More than hypocrites!”  ☞ ☞  page 2 Hopefully, Barça fans will rise up and put a stop to their club being infected by the dictators’ money.

NUFC players and staff recently visited Jeddah, the port city of Saudi Arabia. On the day they set off, Saudi missiles were fired at Yemen. At least 70 people were killed including three children playing on a football field in Hudaida.

NUFC’s visit was a ‘welcome’ distraction from the attack on Yemen. Newcastle players were given the red carpet treatment and news of the deaths was ‘forgotten.’ This is how sportswashing works and why it must be opposed.