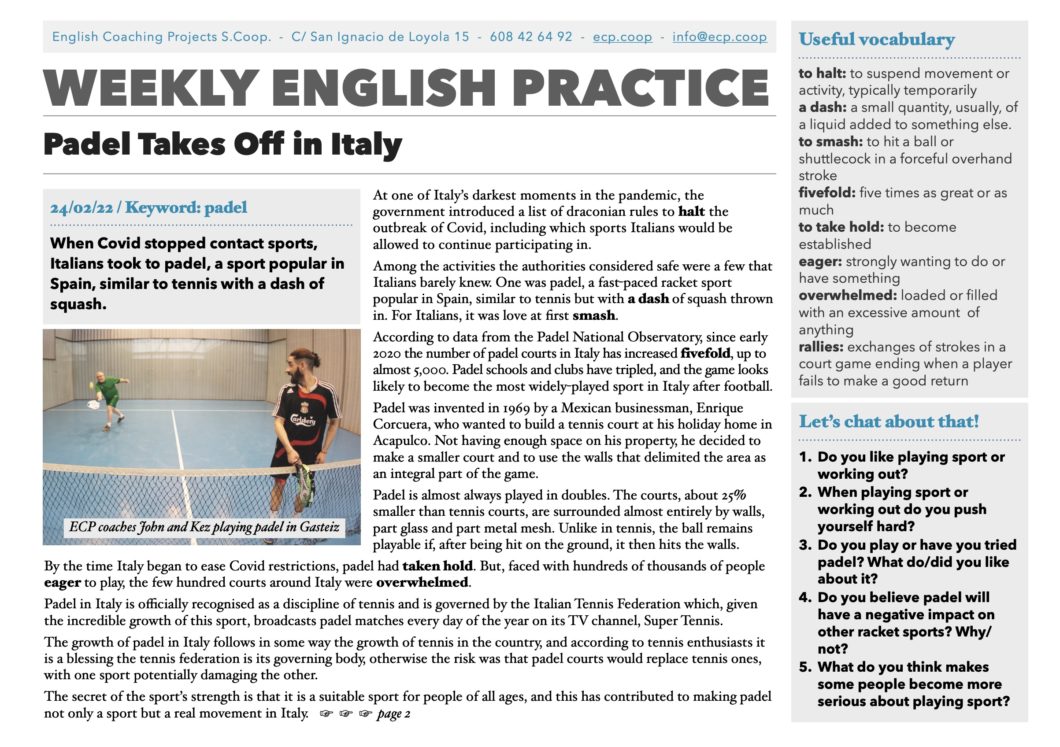 Padel Takes Off In Italy

When Covid stopped contact sports, Italians took to padel, a sport popular in Spain, similar to tennis with a dash of squash.

to halt: to suspend movement or activity, typically temporarily

a dash: a small quantity, usually, of a liquid added to something else.

to smash: to hit a ball or shuttlecock in a forceful overhand stroke

fivefold: five times as great or as much

to take hold: to become established

eager: strongly wanting to do or have something

overwhelmed: loaded or filled with an excessive amount  of anything

rallies: exchanges of strokes in a court game ending when a player fails to make a good return

When Covid stopped contact sports, Italians took to padel, a sport popular in Spain, similar to tennis with a dash of squash.

At one of Italy’s darkest moments in the pandemic, the government introduced a list of draconian rules to halt the outbreak of Covid, including which sports Italians would be allowed to continue participating in.

Among the activities the authorities considered safe were a few that Italians barely knew. One was padel, a fast-paced racket sport popular in Spain, similar to tennis but with a dash of squash thrown in. For Italians, it was love at first smash.

According to data from the Padel National Observatory, since early 2020 the number of padel courts in Italy has increased fivefold, up to almost 5,000. Padel schools and clubs have tripled, and the game looks likely to become the most widely-played sport in Italy after football.

Padel was invented in 1969 by a Mexican businessman, Enrique Corcuera, who wanted to build a tennis court at his holiday home in Acapulco. Not having enough space on his property, he decided to make a smaller court and to use the walls that delimited the area as an integral part of the game.

Padel is almost always played in doubles. The courts, about 25% smaller than tennis courts, are surrounded almost entirely by walls, part glass and part metal mesh. Unlike in tennis, the ball remains playable if, after being hit on the ground, it then hits the walls.

By the time Italy began to ease Covid restrictions, padel had taken hold. But, faced with hundreds of thousands of people eager to play, the few hundred courts around Italy were overwhelmed.

Padel in Italy is officially recognised as a discipline of tennis and is governed by the Italian Tennis Federation which, given the incredible growth of this sport, broadcasts padel matches every day of the year on its TV channel, Super Tennis.

The growth of padel in Italy follows in some way the growth of tennis in the country, and according to tennis enthusiasts it is a blessing the tennis federation is its governing body, otherwise the risk was that padel courts would replace tennis ones, with one sport potentially damaging the other.

The secret of the sport’s strength is that it is a suitable sport for people of all ages, and this has contributed to making padel not only a sport but a real movement in Italy.

The sport is most popular, however, in Spain, where padel courts have long been a common sight. A lot of parents decide this is a good pastime for their kids because they can start playing it very young, it gives them hand-eye coordination and promotes teamwork. They can also start playing rallies immediately so they love it.

Another reason to love padel is that it’s a sociable sport. You have two doubles teams in a small court, which makes social conversation between players an integral part of the game and, in the meantime, allows you to meet new people. It is also an entertaining activity to watch with spectacular points.

Let’s chat about padel and other sports!

Squash is the Healthiest Sport

Badminton: The racket sport that is seriously fast and furious

Missing Sport: It’s So Much More Than a Game