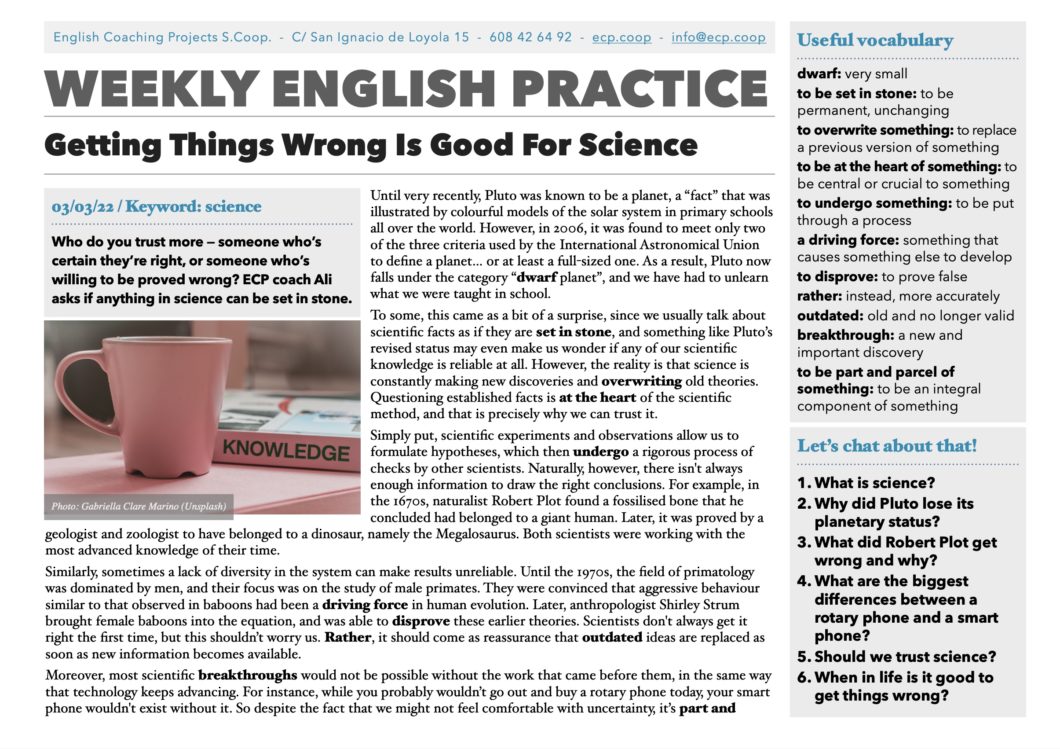 Getting Things Wrong Is Good For Science

Who do you trust more — someone who’s certain they’re right, or someone who’s willing to be proved wrong? ECP coach Ali asks if anything in science can be set in stone.

to be set in stone: to be permanent, unchanging

to overwrite something: to replace a previous version of something

to be at the heart of something: to be central or crucial to something

to undergo something: to be put through a process

a driving force: something that causes something else to develop

to disprove: to prove false

rather: instead, more accurately

outdated: old and no longer valid

breakthrough: a new and important discovery

englishcoachingprojects · Getting Things Wrong Is Good For Science

Who do you trust more — someone who’s certain they’re right, or someone who’s willing to be proved wrong? ECP coach Ali asks if anything in science can be set in stone.

Until very recently, Pluto was known to be a planet, a “fact” that was illustrated by colourful models of the solar system in primary schools all over the world. However, in 2006, it was found to meet only two of the three criteria used by the International Astronomical Union to define a planet… or at least a full-sized one. As a result, Pluto now falls under the category “dwarf planet”, and we have had to unlearn what we were taught in school.

To some, this came as a bit of a surprise, since we usually talk about scientific facts as if they are set in stone, and something like Pluto’s revised status may even make us wonder if any of our scientific knowledge is reliable at all. However, the reality is that science is constantly making new discoveries and overwriting old theories. Questioning established facts is at the heart of the scientific method, and that is precisely why we can trust it.

Simply put, scientific experiments and observations allow us to formulate hypotheses, which then undergo a rigorous process of checks by other scientists. Naturally, however, there isn’t always enough information to draw the right conclusions. For example, in the 1670s, naturalist Robert Plot found a fossilised bone that he concluded had belonged to a giant human. Later, it was proved by a geologist and zoologist to have belonged to a dinosaur, namely the Megalosaurus. Both scientists were working with the most advanced knowledge of their time.

Similarly, sometimes a lack of diversity in the system can make results unreliable. Until the 1970s, the field of primatology was dominated by men, and their focus was on the study of male primates. They were convinced that aggressive behaviour similar to that observed in baboons had been a driving force in human evolution. Later, anthropologist Shirley Strum brought female baboons into the equation, and was able to disprove these earlier theories. Scientists don’t always get it right the first time, but this shouldn’t worry us. Rather, it should come as reassurance that outdated ideas are replaced as soon as new information becomes available.

Moreover, most scientific breakthroughs would not be possible without the work that came before them, in the same way that technology keeps advancing. For instance, while you probably wouldn’t go out and buy a rotary phone today, your smart phone wouldn’t exist without it. So despite the fact that we might not feel comfortable with uncertainty, it’s part and parcel of the scientific process, and it’s what makes progress possible.

Adapted from this video by ECP coach Alison Keable

An Eggcorn Is a Funny Linguistic Error

Don’t Like Science Fiction? This Will Change Your Mind!

Living on the ISS can seriously damage your health!