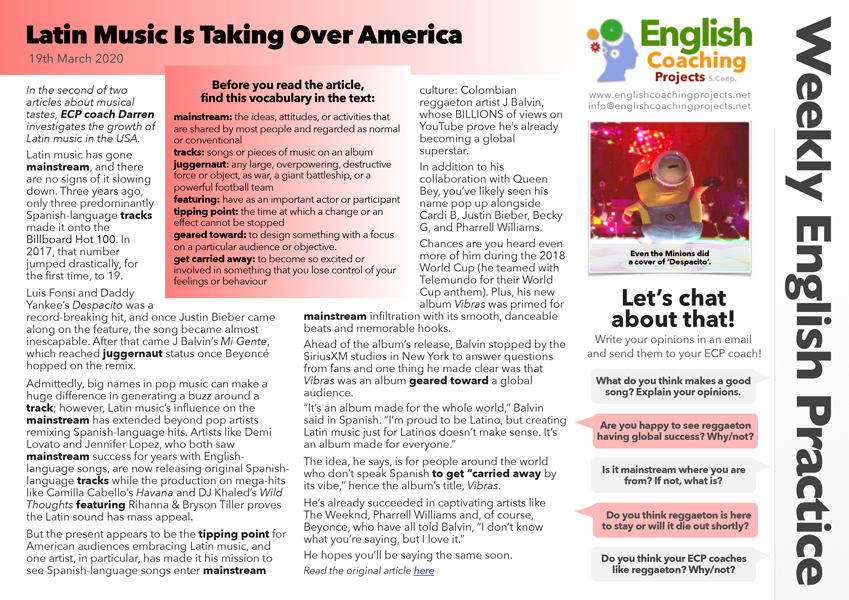 In the second of two articles about musical tastes, ECP coach Darren investigates the growth of Latin music in the USA.

mainstream: the ideas, attitudes, or activities that are shared by most people and regarded as normal or conventional

tracks: songs or pieces of music on an album

juggernaut: any large, overpowering, destructive force or object, as war, a giant battleship, or a powerful football team

featuring: have as an important actor or participant

tipping point: the time at which a change or an effect cannot be stopped

geared toward: to design something with a focus on a particular audience or objective.

get carried away: to become so excited or involved in something that you lose control of your feelings or behaviour

In the second of two articles about musical tastes, ECP coach Darren investigates the growth of Latin music in the USA.

Latin music has gone mainstream, and there are no signs of it slowing down. Three years ago, only three predominantly Spanish-language tracks made it onto the Billboard Hot 100. In 2017, that number jumped drastically, for the first time, to 19.

Luis Fonsi and Daddy Yankee’s Despacito was a record-breaking hit, and once Justin Bieber came along on the feature, the song became almost inescapable. After that came J Balvin’s Mi Gente, which reached juggernaut status once Beyoncé hopped on the remix.

Admittedly, big names in pop music can make a huge difference in generating a buzz around a track; however, Latin music’s influence on the mainstream has extended beyond pop artists remixing Spanish-language hits. Artists like Demi Lovato and Jennifer Lopez, who both saw mainstream success for years with English-language songs, are now releasing original Spanish-language tracks while the production on mega-hits like Camilla Cabello’s Havana and DJ Khaled’s Wild Thoughts featuring Rihanna & Bryson Tiller proves the Latin sound has mass appeal.

But the present appears to be the tipping point for American audiences embracing Latin music, and one artist, in particular, has made it his mission to see Spanish-language songs enter mainstream culture: Colombian reggaeton artist J Balvin, whose BILLIONS of views on YouTube prove he’s already becoming a global superstar.

In addition to his collaboration with Queen Bey, you’ve likely seen his name pop up alongside Cardi B, Justin Bieber, Becky G, and Pharrell Williams.

Chances are you heard even more of him during the 2018 World Cup (he teamed with Telemundo for their World Cup anthem). Plus, his new album Vibras was primed for mainstream infiltration with its smooth, danceable beats and memorable hooks.

Ahead of the album’s release, Balvin stopped by the SiriusXM studios in New York to answer questions from fans and one thing he made clear was that Vibras was an album geared toward a global audience.

The idea, he says, is for people around the world who don’t speak Spanish to get “carried away by its vibe,” hence the album’s title, Vibras.

He’s already succeeded in captivating artists like The Weeknd, Pharrell Williams and, of course, Beyonce, who have all told Balvin, “I don’t know what you’re saying, but I love it.”

He hopes you’ll be saying the same soon.

What do you think makes a good song? Explain your opinions.

Are you happy to see reggaeton having global success? Why/not?

Is it mainstream where you are from? If not, what is?

Do you think reggaeton is here to stay or will it die out shortly?

Do you think your ECP coaches like reggaeton? Why/not?