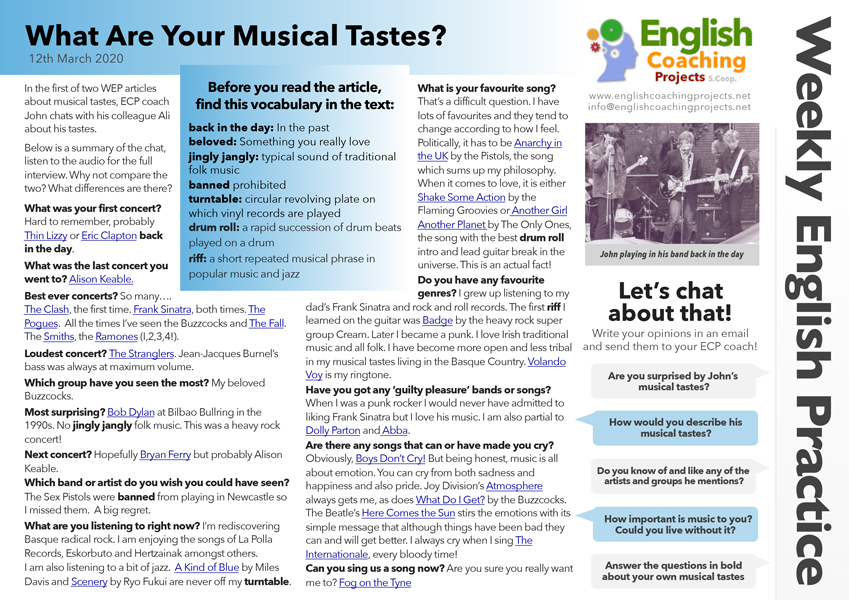 In the first of two WEP articles about musical tastes, ECP coach John chats with his colleague Ali about his tastes.

back in the day: In the past

beloved: Something you really love

turntable: circular revolving plate on which vinyl records are played

drum roll: a rapid succession of drum beats played on a drum

In the first of two WEP articles about musical tastes, ECP coach John chats with his colleague Ali about his tastes.

Below is a summary of the chat, listen to the audio for the full interview. Why not compare the two? What differences are there?

What was your first concert?

Hard to remember, probably Thin Lizzy or Eric Clapton back in the day.

What was the last concert you went to? Alison Keable.

Best ever concerts? So many…. The Clash, the first time. Frank Sinatra, both times. The Pogues.  All the times I’ve seen the Buzzcocks and The Fall. The Smiths, the Ramones (I,2,3,4!).

Which group have you seen the most? My beloved Buzzcocks.

Most surprising? Bob Dylan at Bilbao Bullring in the 1990s. No jingly jangly folk music. This was a heavy rock concert!

Which band or artist do you wish you could have seen? The Sex Pistols were banned from playing in Newcastle so I missed them.  A big regret.

What are you listening to right now? I’m rediscovering Basque radical rock. I am enjoying the songs of La Polla Records, Eskorbuto and Hertzainak amongst others.

I am also listening to a bit of jazz.  A Kind of Blue by Miles Davis and Scenery by Ryo Fukui are never off my turntable.

What is your favourite song? That’s a difficult question. I have lots of favourites and they tend to change according to how I feel. Politically, it has to be Anarchy in the UK by the Pistols, the song which sums up my philosophy.  When it comes to love, it is either Shake Some Action by the Flaming Groovies or Another Girl Another Planet by The Only Ones, the song with the best drum roll intro and lead guitar break in the universe. This is an actual fact!

Do you have any favourite genres? I grew up listening to my dad’s Frank Sinatra and rock and roll records. The first riff I learned on the guitar was Badge by the heavy rock super group Cream. Later I became a punk. I love Irish traditional music and all folk. I have become more open and less tribal in my musical tastes living in the Basque Country. Volando Voy is my ringtone.

Have you got any ‘guilty pleasure’ bands or songs? When I was a punk rocker I would never have admitted to liking Frank Sinatra but I love his music. I am also partial to Dolly Parton and Abba.

Are there any songs that can or have made you cry? Obviously, Boys Don’t Cry! But being honest, music is all about emotion. You can cry from both sadness and happiness and also pride. Joy Division’s Atmosphere always gets me, as does What Do I Get? by the Buzzcocks. The Beatle’s Here Comes the Sun stirs the emotions with its simple message that although things have been bad they can and will get better. I always cry when I sing The Internationale, every bloody time!

Can you sing us a song now? Are you sure you really want me to? Fog on the Tyne

Are you surprised by John’s musical tastes?

How would you describe his musical tastes?

Do you know of and like any of the artists and groups he mentions?

How important is music to you? Could you live without it?

Answer the questions in bold about your own musical tastes