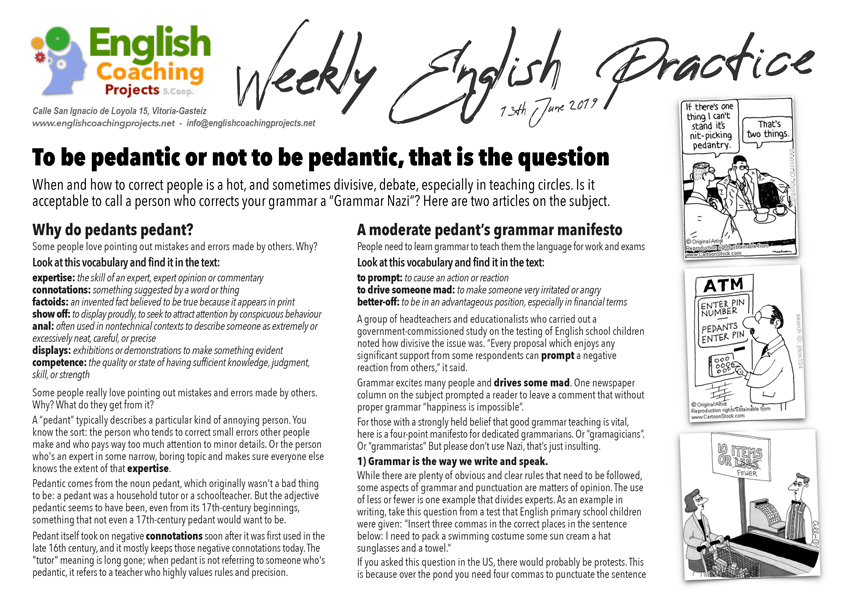 This week’s Weekly English Practice talks about being pedantic. How, when and why should we correct other people? Should we even correct them? Find out more in this week’s WEP!

When and how to correct people is a hot, and sometimes divisive, debate, especially in teaching circles. Is it acceptable to call a person who corrects your grammar a “Grammar Nazi”? Here are two articles on the subject.

Why do pedants pedant?

Some people love pointing out mistakes and errors made by others. Why?

Look at this vocabulary and find it in the text:

expertise: the skill of an expert, expert opinion or commentary

connotations: something suggested by a word or thing

factoids: an invented fact believed to be true because it appears in print

show off: to display proudly, to seek to attract attention by conspicuous behaviour

displays: exhibitions or demonstrations to make something evident

competence: the quality or state of having sufficient knowledge, judgment, skill, or strength

Some people really love pointing out mistakes and errors made by others. Why? What do they get from it?

A “pedant” typically describes a particular kind of annoying person. You know the sort: the person who tends to correct small errors other people make and who pays way too much attention to minor details. Or the person who’s an expert in some narrow, boring topic and makes sure everyone else knows the extent of that expertise.

Pedantic comes from the noun pedant, which originally wasn’t a bad thing to be: a pedant was a household tutor or a schoolteacher. But the adjective pedantic seems to have been, even from its 17th-century beginnings, something that not even a 17th-century pedant would want to be.

Pedant itself took on negative connotations soon after it was first used in the late 16th century, and it mostly keeps those negative connotations today. The “tutor” meaning is long gone; when pedant is not referring to someone who’s pedantic, it refers to a teacher who highly values rules and precision.

Pedants frequently correct grammar and factoids when you are trying to have a friendly chat with them or at a meeting, but almost always when others are present, so they can show off their ‘knowledge’.

For example, plenty of people at conferences or in meetings try to catch speakers out with awkward questions rather than posing alright queries they have a genuine desire to know the answer to.

Pedants are individuals who make excessive displays of their own knowledge based on formal rules and overly precise details with an enormity that disregards common sense. Mostly, they are just BLOODY ANNOYING!

Adapted from a Guardian article written by David Steele

Look at this vocabulary and find it in the text:

to prompt: to cause an action or reaction

to drive someone mad: to make someone very irritated or angry

better-off: to be in an advantageous position, especially in financial terms

A group of headteachers and educationalists who carried out a government-commissioned study on the testing of English school children noted how divisive the issue was. “Every proposal which enjoys any significant support from some respondents can prompt a negative reaction from others,” it said.

Grammar excites many people and drives some mad. One newspaper column on the subject prompted a reader to leave a comment that without proper grammar “happiness is impossible”.

For those with a strongly held belief that good grammar teaching is vital, here is a four-point manifesto for dedicated grammarians. Or “gramagicians”. Or “grammaristas” But please don’t use Nazi, that’s just insulting.

1) Grammar is the way we write and speak.

While there are plenty of obvious and clear rules that need to be followed, some aspects of grammar and punctuation are matters of opinion. The use of less or fewer is one example that divides experts. As an example in writing, take this question from a test that English primary school children were given: “Insert three commas in the correct places in the sentence below: I need to pack a swimming costume some sun cream a hat sunglasses and a towel.”

If you asked this question in the US, there would probably be protests. This is because over the pond you need four commas to punctuate the sentence correctly. Americans would write: “I need to pack a swimming costume, some sun cream, a hat, sunglasses, and a towel.” Most US language authorities regard the comma before the “and” as correct. Most British writers leave it out. Agreement on the matter seems to be impossible.

2) Students need to learn that there is a “standard grammar”.

While we should never discourage a person from speaking in the manner of their family and neighbours, those who are in charge of university admittance and job applications will almost always judge candidates, at least in part, on their use of grammar and vocabulary. That is a good reason to learn the standard grammar rules and when it is appropriate to use them.

This is not about right or wrong. It is about knowing how language is put together. If you know what an adverb, adjective, direct and indirect speech are, it helps you to communicate better and express yourself more convincingly.

This is not just to improve their writing and speaking skills but to teach them the appropriate language for work and study. The failure to teach language more systematically hits young people from the least-advantaged families the hardest. It denies them educational and employment opportunities available to their better-off peers. That, rather than the diminishing use of “whom”, is what should make us all unhappy.

Adapted from a Financial Times article written by Michael Skapinker