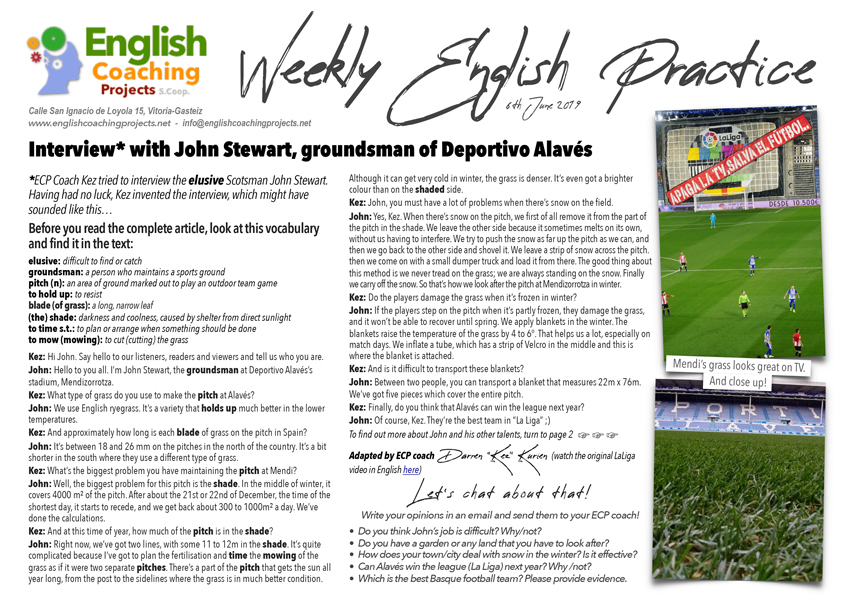 This week’s Weekly English Practice looks at how Deportivo Alavés look after the pitch at their football ground. John Stewart, the groundsman, explains the problems that they face at Mendizorrotza.

*ECP Coach Kez tried to interview the elusive Scotsman John Stewart. Having had no luck, Kez invented the interview, which might have sounded like this…

elusive: difficult to find or catch

groundsman: a person who maintains a sports ground

pitch (n): an area of ground marked out to play an outdoor team game

to hold up: to resist

(the) shade: darkness and coolness, caused by shelter from direct sunlight

to time s.t.: to plan or arrange when something should be done

to mow (mowing): to cut (cutting) the grass

Kez: Hi John. Say hello to our listeners, readers and viewers and tell us who you are.

John: Hello to you all. I’m John Stewart, the groundsman at Deportivo Alavés’s stadium, Mendizorrotza.

Kez: What type of grass do you use to make the pitch at Alavés?

John: We use English ryegrass. It’s a variety that holds up much better in the lower temperatures.

Kez: And approximately how long is each blade of grass on the pitch in Spain?

John: It’s between 18 and 26 mm on the pitches in the north of the country. It’s a bit shorter in the south where they use a different type of grass.

Kez: What’s the biggest problem you have maintaining the pitch at Mendi?

John: Well, the biggest problem for this pitch is the shade. In the middle of winter, it covers 4000 m² of the pitch. After about the 21st or 22nd of December, the time of the shortest day, it starts to recede, and we get back about 300 to 1000m² a day. We’ve done the calculations.

Kez: And at this time of year, how much of the pitch is in the shade?

John: Right now, we’ve got two lines, with some 11 to 12m in the shade. It’s quite complicated because I’ve got to plan the fertilisation and time the mowing of the grass as if it were two separate pitches. There’s a part of the pitch that gets the sun all year long, from the post to the sidelines where the grass is in much better condition.

Although it can get very cold in winter, the grass is denser. It’s even got a brighter colour than on the shaded side.

Kez: John, you must have a lot of problems when there’s snow on the field.

John: Yes, Kez. When there’s snow on the pitch, we first of all remove it from the part of the pitch in the shade. We leave the other side because it sometimes melts on its own, without us having to interfere. We try to push the snow as far up the pitch as we can, and then we go back to the other side and shovel it. We leave a strip of snow across the pitch. then we come on with a small dumper truck and load it from there. The good thing about this method is we never tread on the grass; we are always standing on the snow. Finally we carry off the snow. So that’s how we look after the pitch at Mendizorrotza in winter.

Kez: Do the players damage the grass when it’s frozen in winter?

John: If the players step on the pitch when it’s partly frozen, they damage the grass, and it won’t be able to recover until spring. We apply blankets in the winter. The blankets raise the temperature of the grass by 4 to 6°. That helps us a lot, especially on match days. We inflate a tube, which has a strip of Velcro in the middle and this is where the blanket is attached.

Kez: And is it difficult to transport these blankets?

John: Between two people, you can transport a blanket that measures 22m x 76m. We’ve got five pieces which cover the entire pitch.

Kez: Finally, do you think that Alavés can win the league next year?

To find out more about John and his other talents, turn to page 2  ☞ ☞ ☞