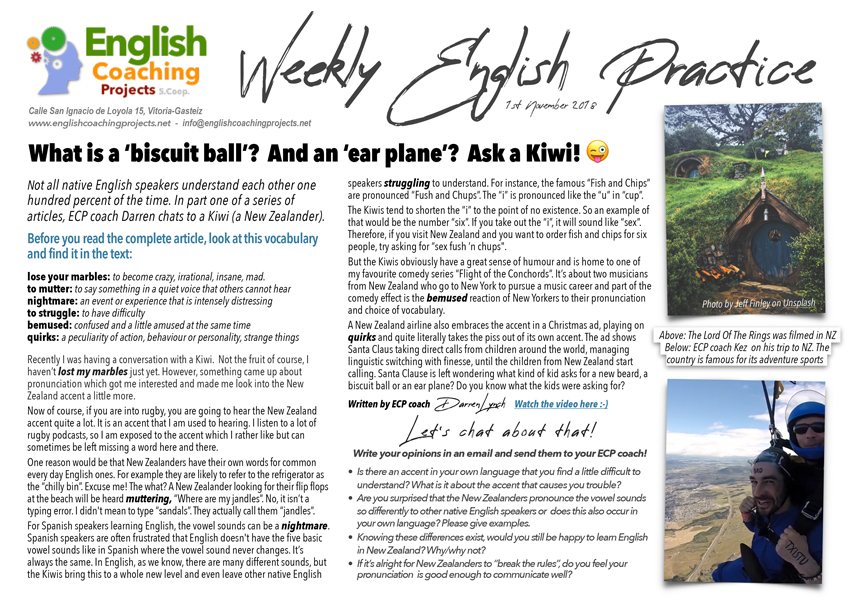 ECP coach Darren talks to a Kiwi about his accent

Not all native English speakers understand each other one hundred per cent of the time. In part one of a series of articles, ECP coach Darren chats to a Kiwi (a New Zealander)

to mutter: to say something in a quiet voice that others cannot hear

nightmare: an event or experience that is intensely distressing

to struggle: to have difficulty

bemused: confused and a little amused at the same time

quirks: a peculiarity of action, behaviour or personality, strange things

Recently I was having a conversation with a Kiwi.  Not the fruit of course, I haven’t lost my marbles just yet. However, something came up about pronunciation which got me interested and made me look into the New Zealand accent a little more.

Now of course, if you are into rugby, you are going to hear the New Zealand accent quite a lot. It is an accent that I am used to hearing. I listen to a lot of rugby podcasts, so I am exposed to the accent which I rather like but can sometimes be left missing a word here and there.

One reason would be that New Zealanders have their own words for common everyday English ones. For example, they are likely to refer to the refrigerator as the “chilly bin”. Excuse me! The what? A New Zealander looking for their flip-flops at the beach will be heard muttering, “Where are my jandles”. No, it isn’t a typing error. I didn’t mean to type “sandals”. They actually call them “jandles”.

For Spanish speakers learning English, the vowel sounds can be a nightmare. Spanish speakers are often frustrated that English doesn’t have the five basic vowel sounds like in Spanish where the vowel sound never changes. It’s always the same. In English, as we know, there are many different sounds, but the Kiwis bring this to a whole new level and even leave other native English speakers struggling to understand. For instance, the famous “Fish and Chips” are pronounced “Fush and Chups”. The “i” is pronounced like the “u” in “cup”.

The Kiwis tend to shorten the “i” to the point of no existence. So an example of that would be the number “six”. If you take out the “i”, it will sound like “sex”. Therefore, if you visit New Zealand and you want to order fish and chips for six people, try asking for “sex fush ’n chups”.

But the Kiwis obviously have a great sense of humour and is home to one of my favourite comedy series “Flight of the Conchords”. It’s about two musicians from New Zealand who go to New York to pursue a music career and part of the comedy effect is the bemused reaction of New Yorkers to their pronunciation and choice of vocabulary.

A New Zealand airline also embraces the accent in a Christmas ad, playing on quirks and quite literally takes the piss out of its own accent. The ad shows Santa Claus taking direct calls from children around the world, managing linguistic switching with finesse, until the children from New Zealand start calling. Santa Clause is left wondering what kind of kid asks for a new beard, a biscuit ball or an ear plane? Do you know what the kids were asking for?