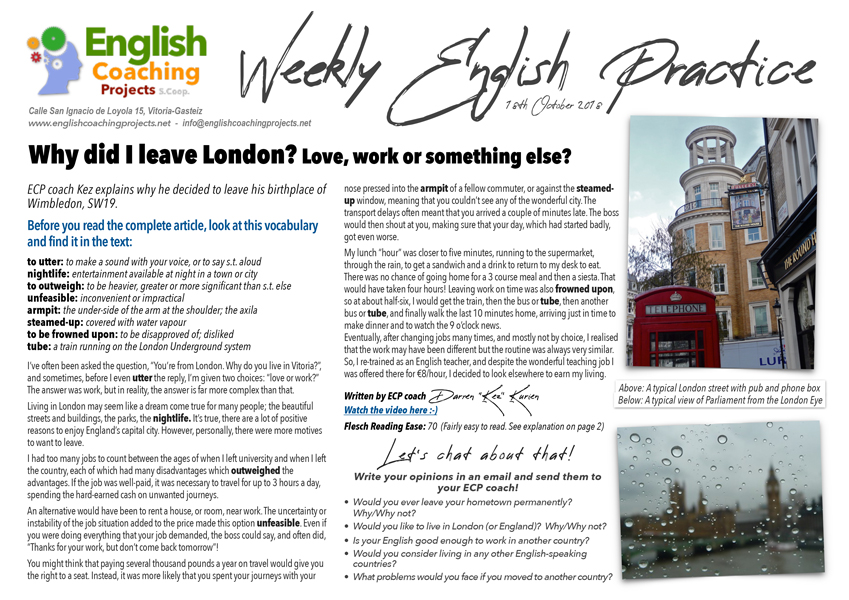 ECP coach Kez explains why he left his hometown of London

ECP coach Kez explains why he decided to leave his birthplace of Wimbledon, SW19

to utter: to make a sound with your voice, or to say s.t. aloud

nightlife: entertainment available at night in a town or city

to outweigh: to be heavier, greater or more significant than s.t. else

armpit: the under-side of the arm at the shoulder; the axila

to be frowned upon: to be disapproved of; disliked

tube: a train running on the London Underground system

I’ve often been asked the question, “You’re from London. Why do you live in Vitoria?”, and sometimes, before I even utter the reply, I’m given two choices: “love or work?” The answer was work, but in reality, the answer is far more complex than that.

Living in London may seem like a dream come true for many people; the beautiful streets and buildings, the parks, the nightlife. It’s true, there are a lot of positive reasons to enjoy England’s capital city. However, personally, there were more motives to want to leave.

I had too many jobs to count between the ages of when I left university and when I left the country, each of which had many disadvantages which outweighed the advantages. If the job was well-paid, it was necessary to travel for up to 3 hours a day, spending the hard-earned cash on unwanted journeys.

An alternative would have been to rent a house, or room, near work. The uncertainty or instability of the job situation added to the price made this option unfeasible. Even if you were doing everything that your job demanded, the boss could say, and often did, “Thanks for your work, but don’t come back tomorrow”!

You might think that paying several thousand pounds a year on travel would give you the right to a seat. Instead, it was more likely that you spent your journeys with your nose pressed into the armpit of a fellow commuter, or against the steamed-up window, meaning that you couldn’t see any of the wonderful city. The transport delays often meant that you arrived a couple of minutes late. The boss would then shout at you, making sure that your day, which had started badly, got even worse.

My lunch “hour” was closer to five minutes, running to the supermarket, through the rain, to get a sandwich and a drink to return to my desk to eat. There was no chance of going home for a 3 course meal and then a siesta. That would have taken four hours! Leaving work on time was also frowned upon, so at about half-six, I would get the train, then the bus or tube, then another bus or tube, and finally walk the last 10 minutes home, arriving just in time to make dinner and to watch the 9 o’clock news.

Eventually, after changing jobs many times, and mostly not by choice, I realised that the work may have been different but the routine was always very similar. So, I re-trained as an English teacher, and despite the wonderful teaching job I was offered there for €8/hour, I decided to look elsewhere to earn my living.