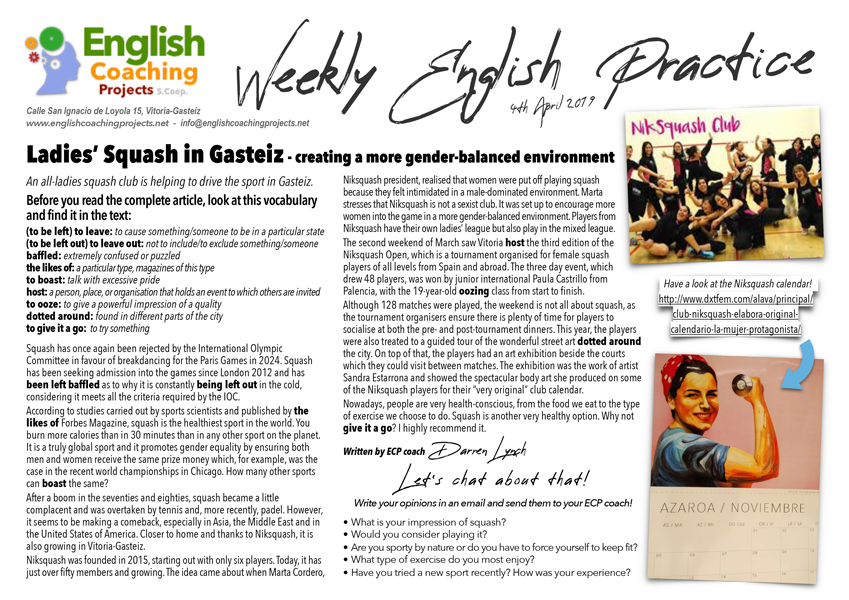 In this week’s Weekly English Practice, ECP coach Darren talks about Niksquash, an all-ladies squash club in Gasteiz. To find out more, read and listen to this week’s WEP!

An all-ladies squash club is helping to drive the sport in Gasteiz.

(to be left) to leave: to cause something/someone to be in a particular state

(to be left out) to leave out: not to include/to exclude something/someone

the likes of: a particular type, magazines of this type

to boast: talk with excessive pride

host: a person, place, or organisation that holds an event to which others are invited

to ooze: to give a powerful impression of a quality

dotted around: found in different parts of the city

to give it a go:  to try something

Squash has once again been rejected by the International Olympic Committee in favour of breakdancing for the Paris Games in 2024. Squash has been seeking admission into the games since London 2012 and has been left baffled as to why it is constantly being left out in the cold, considering it meets all the criteria required by the IOC.

According to studies carried out by sports scientists and published by the likes of Forbes Magazine, squash is the healthiest sport in the world. You burn more calories than in 30 minutes than in any other sport on the planet. It is a truly global sport and it promotes gender equality by ensuring both men and women receive the same prize money which, for example, was the case in the recent world championships in Chicago. How many other sports can boast the same?

After a boom in the seventies and eighties, squash became a little complacent and was overtaken by tennis and, more recently, padel. However, it seems to be making a comeback, especially in Asia, the Middle East and in the United States of America. Closer to home and thanks to Niksquash, it is also growing in Vitoria-Gasteiz.

Niksquash was founded in 2015, starting out with only six players. Today, it has just over fifty members and growing. The idea came about when Marta Cordero, Niksquash president, realised that women were put off playing squash because they felt intimidated in a male-dominated environment. Marta stresses that Niksquash is not a sexist club. It was set up to encourage more women into the game in a more gender-balanced environment. Players from Niksquash have their own ladies’ league but also play in the mixed league.

The second weekend of March saw Vitoria host the third edition of the Niksquash Open, which is a tournament organised for female squash players of all levels from Spain and abroad. The three day event, which drew 48 players, was won by junior international Paula Castrillo from Palencia, with the 19-year-old oozing class from start to finish.

Although 128 matches were played, the weekend is not all about squash, as the tournament organisers ensure there is plenty of time for players to socialise at both the pre- and post-tournament dinners. This year, the players were also treated to a guided tour of the wonderful street art dotted around the city. On top of that, the players had an art exhibition beside the courts which they could visit between matches. The exhibition was the work of artist Sandra Estarrona and showed the spectacular body art she produced on some of the Niksquash players for their “very original” club calendar.

Nowadays, people are very health-conscious, from the food we eat to the type of exercise we choose to do. Squash is another very healthy option. Why not give it a go? I highly recommend it.