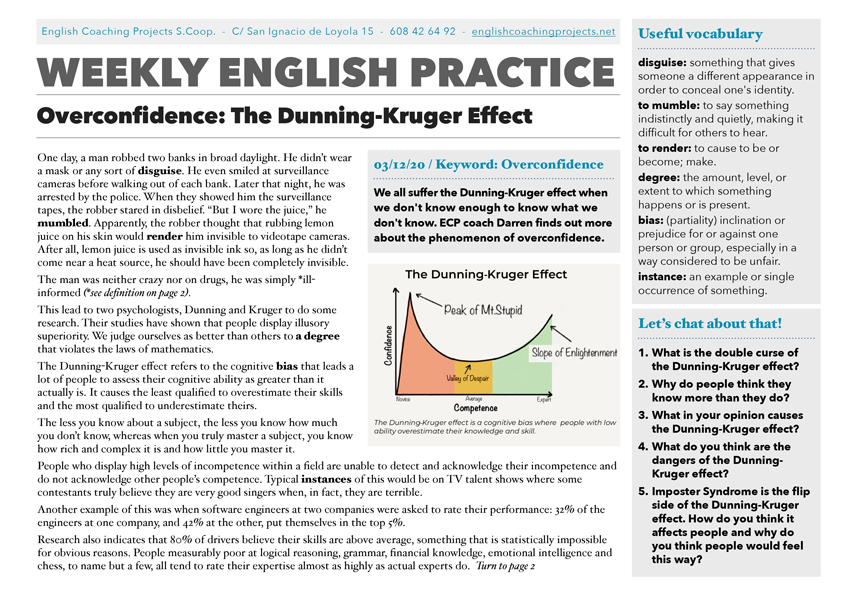 We all suffer the Dunning-Kruger effect when we don’t know enough to know what we don’t know. ECP coach Darren finds out more about the phenomenon of overconfidence.

disguise: something that gives someone a different appearance in order to conceal one’s identity.

to mumble: to say something indistinctly and quietly, making it difficult for others to hear.

to render: to cause to be or become; make.

degree: the amount, level, or extent to which something happens or is present.

bias: (partiality) inclination or prejudice for or against one person or group, especially in a way considered to be unfair.

instance: an example or single occurrence of something.

We all suffer the Dunning-Kruger effect when we don’t know enough to know what we don’t know. ECP coach Darren finds out more about the phenomenon of overconfidence.

One day, a man robbed two banks in broad daylight. He didn’t wear a mask or any sort of disguise. He even smiled at surveillance cameras before walking out of each bank. Later that night, he was arrested by the police. When they showed him the surveillance tapes, the robber stared in disbelief. “But I wore the juice,” he mumbled. Apparently, the robber thought that rubbing lemon juice on his skin would render him invisible to videotape cameras. After all, lemon juice is used as invisible ink so, as long as he didn’t come near a heat source, he should have been completely invisible.

The man was neither crazy nor on drugs, he was simply ill-informed.

This lead to two psychologists, Dunning and Kruger to do some research. Their studies have shown that people display illusory superiority. We judge ourselves as better than others to a degree that violates the laws of mathematics.

People who display high levels of incompetence within a field are unable to detect and acknowledge their incompetence and do not acknowledge other people’s competence. Typical instances of this would be on TV talent shows where some contestants truly believe they are very good singers when, in fact, they are terrible.

Another example of this was when software engineers at two companies were asked to rate their performance: 32% of the engineers at one company, and 42% at the other, put themselves in the top 5%.

Research also indicates that 80% of drivers believe their skills are above average, something that is statistically impossible for obvious reasons. People measurably poor at logical reasoning, grammar, financial knowledge, emotional intelligence and chess, to name but a few, all tend to rate their expertise almost as highly as actual experts do.

Socrates once said that his wisdom was knowing how much he did not know. It probably made very little sense at the time, but now it’s obvious just how wise he actually was. The overconfidence of the Dunning-Kruger effect is not simply about showing off. It is a genuine inability to see one’s own shortcomings.

True Or False: Do You Believe The Stories?