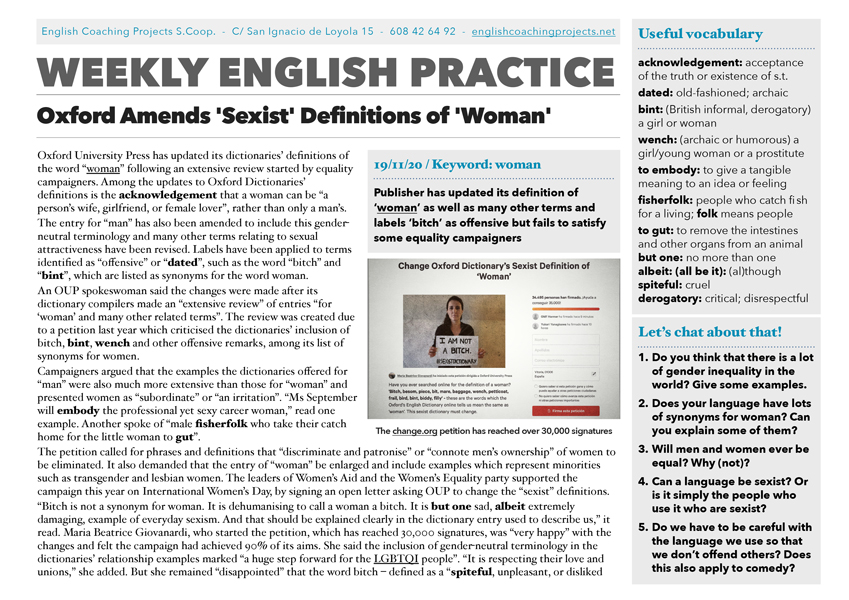 Publisher has updated its definition of ‘woman’ as well as many other terms and labels ‘bitch’ as offensive but fails to satisfy some equality campaigners.

acknowledgement: acceptance of the truth or existence of s.t.

wench: (archaic or humorous) a girl/young woman or a prostitute

to embody: to give a tangible meaning to an idea or feeling

to gut: to remove the intestines and other organs from an animal

but one: no more than one

Publisher has updated its definition of ‘woman’ as well as many other terms and labels ‘bitch’ as offensive but fails to satisfy some equality campaigners.

The entry for “man” has also been amended to include this gender-neutral terminology and many other terms relating to sexual attractiveness have been revised. Labels have been applied to terms identified as “offensive” or “dated”, such as the word “bitch” and “bint”, which are listed as synonyms for the word woman.

An OUP spokeswoman said the changes were made after its dictionary compilers made an “extensive review” of entries “for ‘woman’ and many other related terms”. The review was created due to a petition last year which criticised the dictionaries’ inclusion of bitch, bint, wench and other offensive remarks, among its list of synonyms for women.

Campaigners argued that the examples the dictionaries offered for “man” were also much more extensive than those for “woman” and presented women as “subordinate” or “an irritation”. “Ms September will embody the professional yet sexy career woman,” read one example. Another spoke of “male fisherfolk who take their catch home for the little woman to gut”.

The petition called for phrases and definitions that “discriminate and patronise” or “connote men’s ownership” of women to be eliminated. It also demanded that the entry of “woman” be enlarged and include examples which represent minorities such as transgender and lesbian women. The leaders of Women’s Aid and the Women’s Equality party supported the campaign this year on International Women’s Day, by signing an open letter asking OUP to change the “sexist” definitions.

“Bitch is not a synonym for woman. It is dehumanising to call a woman a bitch. It is but one sad, albeit extremely damaging, example of everyday sexism. And that should be explained clearly in the dictionary entry used to describe us,” it read. Maria Beatrice Giovanardi, who started the petition, which has reached 30,000 signatures, was “very happy” with the changes and felt the campaign had achieved 90% of its aims.

She said the inclusion of gender-neutral terminology in the dictionaries’ relationship examples marked “a huge step forward for the LGBTQI people”. “It is respecting their love and unions,” she added. But she remained “disappointed” that the word bitch – defined as a “spiteful, unpleasant, or disliked woman” – continued to be listed as a synonym, albeit now labelled as “offensive”.

She contrasted this to the classification of the word dickhead – defined “as a stupid, irritating, or ridiculous man” – which is considered “vulgar slang” and not included in the list of synonyms for men.

An OUP spokeswoman said their dictionaries “reflect, rather than dictate, how language is used. This is driven solely by evidence of how real people use English in their daily lives. “This independent editorial approach means that our dictionaries provide an accurate representation of language, even where it means recording senses and example uses of words that are offensive or derogatory, and which we wouldn’t necessarily employ ourselves.”

The OUP said its review has developed into an ongoing project to re-examine our treatment of language, with recent work undertaken around race and racial diversity and on the use of “they” as a pronoun for people whose gender identity is neither exclusively male nor female.

Adapted by ECP Coach Kez Kurien from this article:

Let’s chat about the definition of woman!

Women’s football and the ACFF

Can Computers Understand Ambiguity in Languages?