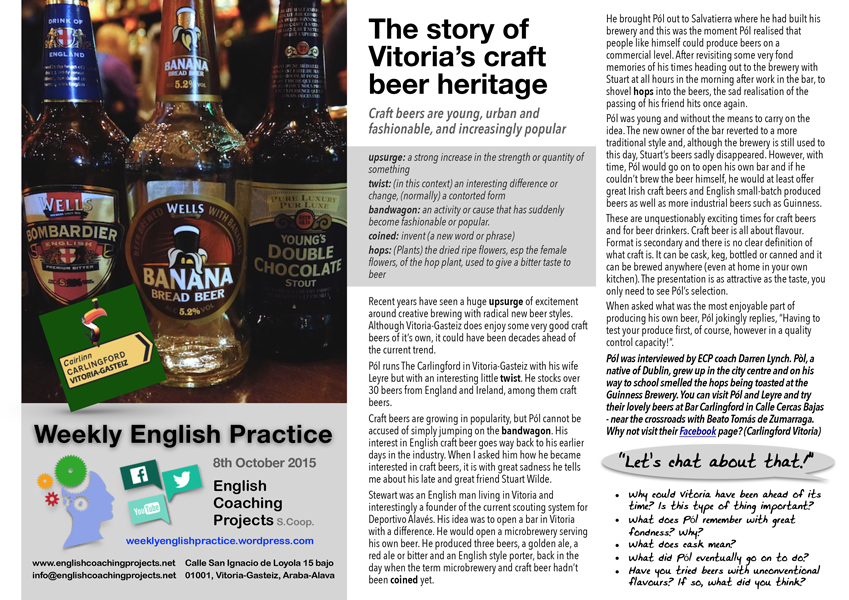 Craft beers are young, urban and fashionable, and increasingly popular

upsurge: a strong increase in the strength or quantity of something

twist: (in this context) an interesting difference or change, (normally) a contorted form

bandwagon: an activity or cause that has suddenly become fashionable or popular.

hops: (Plants) the dried ripe flowers, esp the female flowers, of the hop plant, used to give a bitter taste to beer

Recent years have seen a huge upsurge of excitement around creative brewing with radical new beer styles. Although Vitoria-Gasteiz does enjoy some very good craft beers of it’s own, it could have been decades ahead of the current trend.

Pól runs The Carlingford in Vitoria-Gasteiz with his wife Leyre but with an interesting little twist. He stocks over 30 beers from England and Ireland, among them craft beers.

Craft beers are growing in popularity, but Pól cannot be accused of simply jumping on the bandwagon. His interest in English craft beer goes way back to his earlier days in the industry. When I asked him how he became interested in craft beers, it is with great sadness he tells me about his late and great friend Stuart Wilde.

Stewart was an English man living in Vitoria and interestingly a founder of the current scouting system for Deportivo Alavés. His idea was to open a bar in Vitoria with a difference. He would open a microbrewery serving his own beer. He produced three beers, a golden ale, a red ale or bitter and an English style porter, back in the day when the term microbrewery and craft beer hadn’t been coined yet.

He brought Pól out to Salvatierra where he had built his brewery and this was the moment Pól realised that people like himself could produce beers on a commercial level. After revisiting some very fond memories of his times heading out to the brewery with Stuart at all hours in the morning after work in the bar, to shovel hops into the beers, the sad realisation of the passing of his friend hits once again.

Pól was young and without the means to carry on the idea. The new owner of the bar reverted to a more traditional style and, although the brewery is still used to this day, Stuart’s beers sadly disappeared. However, with time, Pól would go on to open his own bar and if he couldn’t brew the beer himself, he would at least offer great Irish craft beers and English small-batch produced beers as well as more industrial beers such as Guinness.

These are unquestionably exciting times for craft beers and for beer drinkers. Craft beer is all about flavour. Format is secondary and there is no clear definition of what craft is. It can be cask, keg, bottled or canned and it can be brewed anywhere (even at home in your own kitchen). The presentation is as attractive as the taste, you only need to see Pól’s selection.

When asked what was the most enjoyable part of producing his own beer, Pól jokingly replies, “Having to test your produce first, of course, however in a quality control capacity!”.

Pól was interviewed by ECP coach Darren Lynch. Pòl, a native of Dublin, grew up in the city centre and on his way to school smelled the hops being toasted at the Guinness Brewery. You can visit Pól and Leyre and try their lovely beers at Bar Carlingford in Calle Cercas Bajas – near the crossroads with Beato Tomás de Zumarraga. Why not visit their Facebook page? (Carlingford Vitoria)