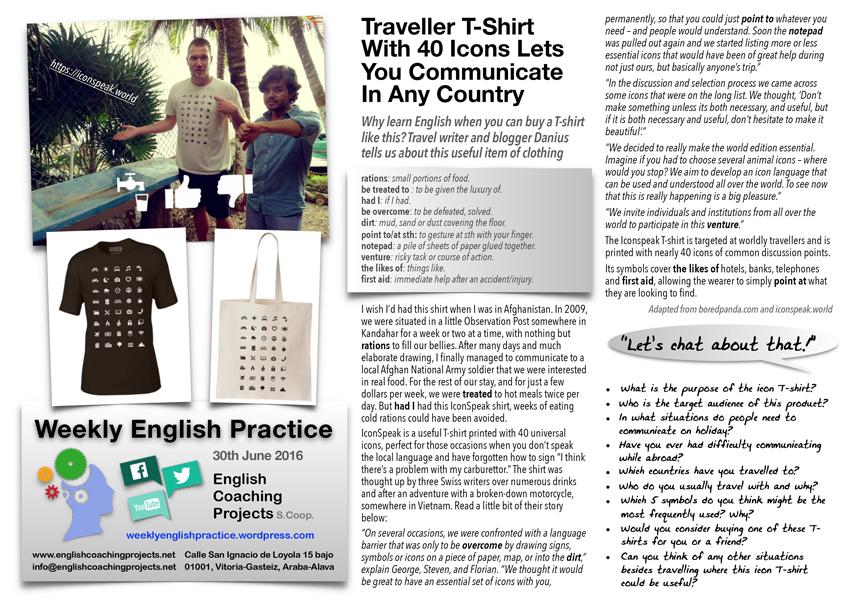 Why learn English when you can buy a T-shirt like this? Travel writer and blogger Danius tells us about this useful item of clothing

be treated to : to be given the luxury of.

be overcome: to be defeated, solved.

point to/at sth: to gesture at sth with your finger.

notepad: a pile of sheets of paper glued together.

I wish I’d had this shirt when I was in Afghanistan. In 2009, we were situated in a little Observation Post somewhere in Kandahar for a week or two at a time, with nothing but rations to fill our bellies. After many days and much elaborate drawing, I finally managed to communicate to a local Afghan National Army soldier that we were interested in real food. For the rest of our stay, and for just a few dollars per week, we were treated to hot meals twice per day. But had I had this IconSpeak shirt, weeks of eating cold rations could have been avoided.

IconSpeak is a useful T-shirt printed with 40 universal icons, perfect for those occasions when you don’t speak the local language and have forgotten how to sign “I think there’s a problem with my carburettor.” The shirt was thought up by three Swiss writers over numerous drinks and after an adventure with a broken-down motorcycle, somewhere in Vietnam. Read a little bit of their story below:

“On several occasions, we were confronted with a language barrier that was only to be overcome by drawing signs, symbols or icons on a piece of paper, map, or into the dirt,” explain George, Steven, and Florian. “We thought it would be great to have an essential set of icons with you, permanently, so that you could just point to whatever you need – and people would understand. Soon the notepad was pulled out again and we started listing more or less essential icons that would have been of great help during not just ours, but basically anyone’s trip.”

“In the discussion and selection process we came across some icons that were on the long list. We thought, ‘Don’t make something unless its both necessary, and useful, but if it is both necessary and useful, don’t hesitate to make it beautiful’.”

“We decided to really make the world edition essential. Imagine if you had to choose several animal icons – where would you stop? We aim to develop an icon language that can be used and understood all over the world. To see now that this is really happening is a big pleasure.”

“We invite individuals and institutions from all over the world to participate in this venture.”

The Iconspeak T-shirt is targeted at worldly travellers and is printed with nearly 40 icons of common discussion points.

Its symbols cover the likes of hotels, banks, telephones and first aid, allowing the wearer to simply point at what they are looking to find.

Adapted from boredpanda.com and iconspeak.world