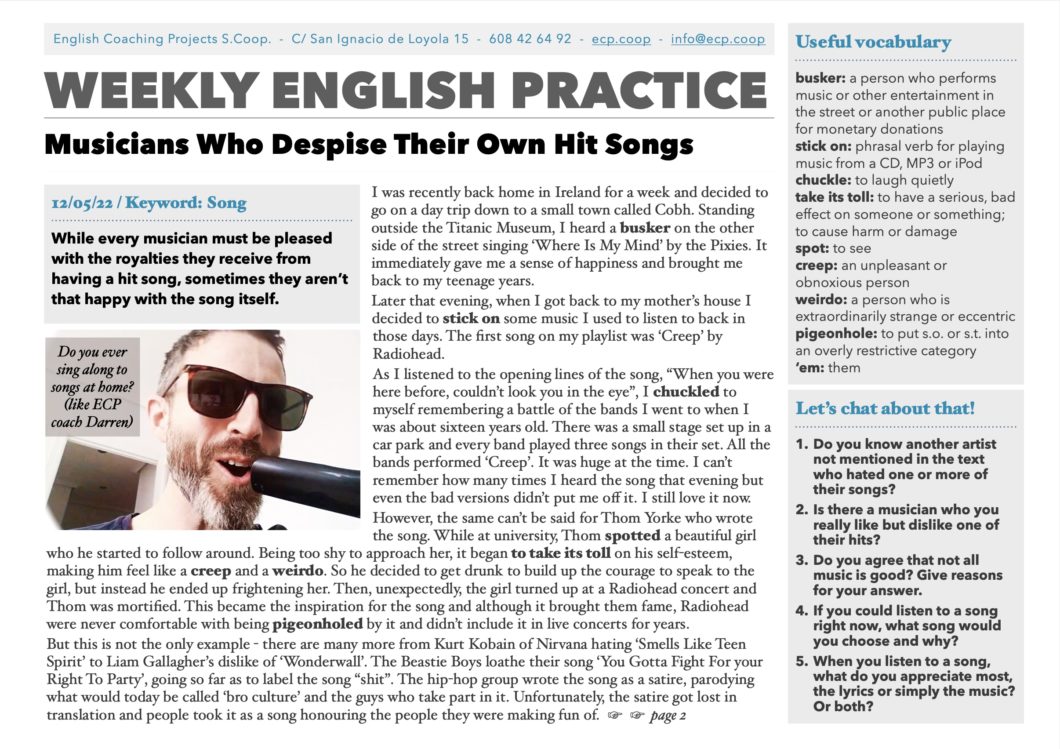 Musicians Who Despise Their Own Hit Songs

While every musician must be pleased with the royalties they receive from having a hit song, sometimes they aren’t that happy with the song itself.

busker: a person who performs music or other entertainment in the street or another public place for monetary donations

stick on: phrasal verb for playing music from a CD, MP3 or iPod

take its toll: to have a serious, bad effect on someone or something;to cause harm or damage

creep: an unpleasant or obnoxious person

weirdo: a person who is extraordinarily strange or eccentric

pigeonhole: to put s.o. or s.t. into an overly restrictive category

englishcoachingprojects · Musicians Who Despise Their Songs

Musicians Who Despise Their Own Hit Songs

While every musician must be pleased with the royalties they receive from having a hit song, sometimes they aren’t that happy with the song itself.

I was recently back home in Ireland for a week and decided to go on a day trip down to a small town called Cobh. Standing outside the Titanic Museum, I heard a busker on the other side of the street singing ‘Where Is My Mind’ by the Pixies. It immediately gave me a sense of happiness and brought me back to my teenage years.

Later that evening, when I got back to my mother’s house I decided to stick on some music I used to listen to back in those days. The first song on my playlist was ‘Creep’ by Radiohead.

As I listened to the opening lines of the song, “When you were here before, couldn’t look you in the eye”, I chuckled to myself remembering a battle of the bands I went to when I was about sixteen years old. There was a small stage set up in a car park and every band played three songs in their set. All the bands performed ‘Creep’. It was huge at the time. I can’t remember how many times I heard the song that evening but even the bad versions didn’t put me off it. I still love it now.

However, the same can’t be said for Thom Yorke who wrote the song. While at university, Thom spotted a beautiful girl who he started to follow around. Being too shy to approach her, it began to take its toll on his self-esteem, making him feel like a creep and a weirdo. So he decided to get drunk to build up the courage to speak to the girl, but instead he ended up frightening her. Then, unexpectedly, the girl turned up at a Radiohead concert and Thom was mortified. This became the inspiration for the song and although it brought them fame, Radiohead were never comfortable with being pigeonholed by it and didn’t include it in live concerts for years.

But this is not the only example – there are many more from Kurt Kobain of Nirvana hating ‘Smells Like Teen Spirit’ to Liam Gallagher’s dislike of ‘Wonderwall’. The Beastie Boys loathe their song ‘You Gotta Fight For your Right To Party’, going so far as to label the song “shit”. The hip-hop group wrote the song as a satire, parodying what would today be called ‘bro culture’ and the guys who take part in it. Unfortunately, the satire got lost in translation and people took it as a song honouring the people they were making fun of.

To write a hit song is, well, to my mind, an extraordinary talent, so it’s incredible that the artists themselves sometimes refer to their work as “a piece of shit”, which is exactly how Frank Sinatra referred to ‘Strangers In The Night’. But I want to say, keep ’em coming.

1. Do you know another artist not mentioned in the text who hated one or more of their songs?

2. Is there a musician who you really like but dislike one of their hits?

3. Do you agree that not all music is good? Give reasons for your answer.

4. If you could listen to a song right now, what song would you choose and why?

5. When you listen to a song, what do you appreciate most, the lyrics or simply the music? Or both?