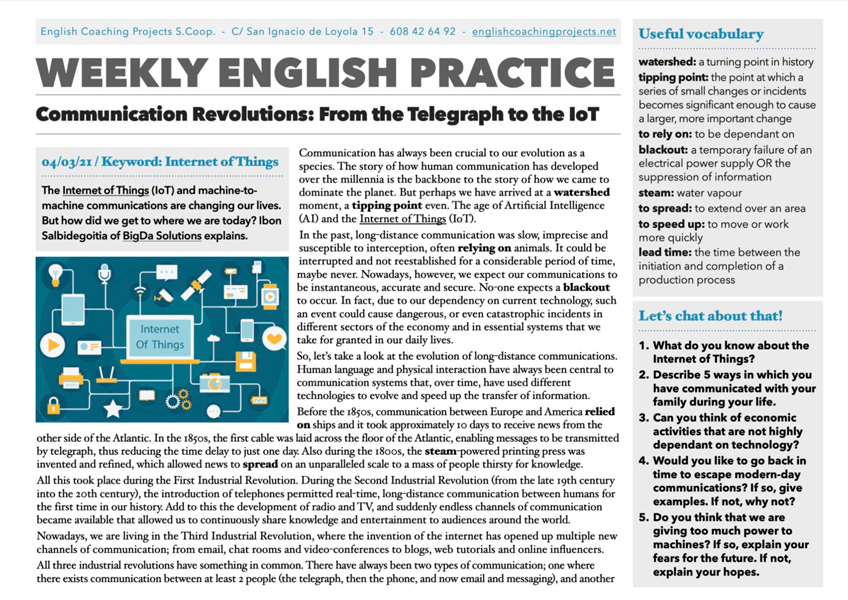 Communication Revolutions: From the Telegraph to the Internet of Things

The Internet of Things (IoT) and machine-to-machine communications are changing our lives. But how did we get to where we are today? Ibon Salbidegoitia of BigDa Solutions explains.

watershed: a turning point in history

tipping point: the point at which a series of small changes or incidents becomes significant enough to cause a larger, more important change

to rely on: to be dependant on

blackout: a temporary failure of an electrical power supply OR the suppression of information

to spread: to extend over an area

to speed up: to move or work more quickly

lead time: the time between the initiation and completion of a production process

The Internet of Things (IoT) and machine-to-machine communications are changing our lives. But how did we get to where we are today? Ibon Salbidegoitia of BigDa Solutions explains.

Communication has always been crucial to our evolution as a species. The story of how human communication has developed over the millennia is the backbone to the story of how we came to dominate the planet. But perhaps we have arrived at a watershed moment, a tipping point even. The age of Artificial Intelligence (AI) and the Internet of Things (IoT).

In the past, long-distance communication was slow, imprecise and susceptible to interception, often relying on animals. It could be interrupted and not reestablished for a considerable period of time, maybe never. Nowadays, however, we expect our communications to be instantaneous, accurate and secure. No-one expects a blackout to occur. In fact, due to our dependency on current technology, such an event could cause dangerous, or even catastrophic incidents in different sectors of the economy and in essential systems that we take for granted in our daily lives.

So, let’s take a look at the evolution of long-distance communications. Human language and physical interaction have always been central to communication systems that, over time, have used different technologies to evolve and speed up the transfer of information.

Before the 1850s, communication between Europe and America relied on ships and it took approximately 10 days to receive news from the other side of the Atlantic. In the 1850s, the first cable was laid across the floor of the Atlantic, enabling messages to be transmitted by telegraph, thus reducing the time delay to just one day. Also during the 1800s, the steam-powered printing press was invented and refined, which allowed news to spread on an unparalleled scale to a mass of people thirsty for knowledge.

All this took place during the First Industrial Revolution. During the Second Industrial Revolution (from the late 19th century into the 20th century), the introduction of telephones permitted real-time, long-distance communication between humans for the first time in our history. Add to this the development of radio and TV, and suddenly endless channels of communication became available that allowed us to continuously share knowledge and entertainment to audiences around the world.

Nowadays, we are living in the Third Industrial Revolution, where the invention of the internet has opened up multiple new channels of communication; from email, chat rooms and video-conferences to blogs, web tutorials and online influencers.

All three industrial revolutions have something in common. There have always been two types of communication; one where there exists communication between at least 2 people (the telegraph, then the phone, and now email and messaging), and another where we unilaterally spread knowledge, news or just an individual’s view of life. Now though, there is a difference: the machines are doing the talking, and they are talking to each other.

Industry has always invested heavily in these communication systems; speeding up lead times while attempting to either break into new markets or maintain leadership over an existing one. The IoT is just the latest innovation in this centuries-old progression. This time, the emphasis is on using machine-to-machine communication to acquire as much information as possible and, by using AI to analyse this data, make better-informed decisions. Because as Lord Kelvin, the 19th-century mathematical physicist and engineer said, “What is not measured, cannot be improved. What is not improved, is always degraded.”

IoT, machine-to-machine communications are allowing us to expand our measurement capabilities at very low costs and start a new communications revolution that will take industry – and society – into the digital age and beyond.

Let’s chat about the Internet of Things!

Could our digital records disappear in a disaster or an attack?

Can Computers Understand Ambiguity in Languages?