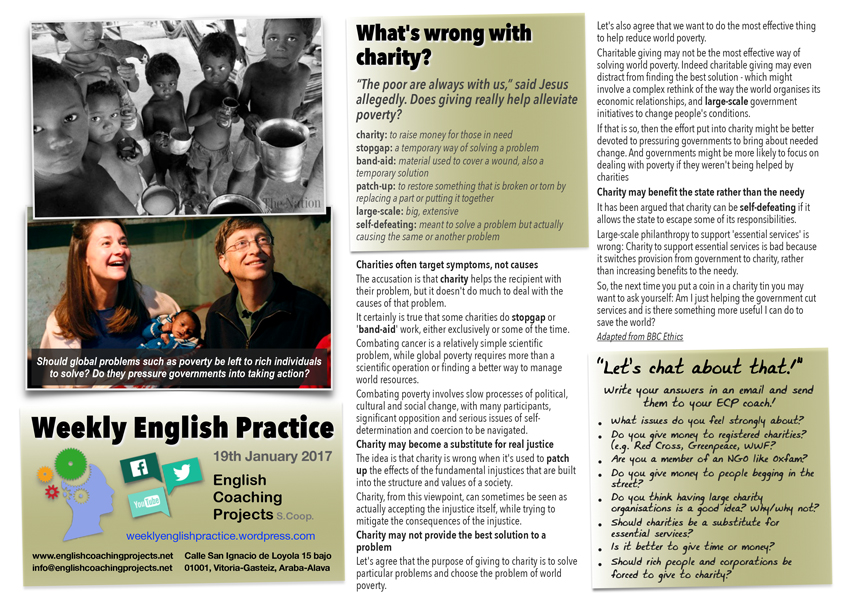 “The poor are always with us,” said Jesus allegedly. Does giving really help alleviate poverty?

charity: to raise money for those in need

stopgap: a temporary way of solving a problem

patch-up: to restore something that is broken or torn by replacing a part or putting it together

self-defeating: meant to solve a problem but actually causing the same or another problem

The accusation is that charity helps the recipient with their problem, but it doesn’t do much to deal with the causes of that problem.

It certainly is true that some charities do stopgap or ‘band-aid‘ work, either exclusively or some of the time.

Combating cancer is a relatively simple scientific problem, while global poverty requires more than a scientific operation or finding a better way to manage world resources.

Combating poverty involves slow processes of political, cultural and social change, with many participants, significant opposition and serious issues of self-determination and coercion to be navigated.

Charity may become a substitute for real justice

The idea is that charity is wrong when it’s used to patch up the effects of the fundamental injustices that are built into the structure and values of a society.

Charity, from this viewpoint, can sometimes be seen as actually accepting the injustice itself, while trying to mitigate the consequences of the injustice.

Charity may not provide the best solution to a problem

Let’s agree that the purpose of giving to charity is to solve particular problems and choose the problem of world poverty.

Let’s also agree that we want to do the most effective thing to help reduce world poverty.

Charitable giving may not be the most effective way of solving world poverty. Indeed charitable giving may even distract from finding the best solution – which might involve a complex rethink of the way the world organises its economic relationships, and large-scale government initiatives to change people’s conditions.

If that is so, then the effort put into charity might be better devoted to pressuring governments to bring about needed change. And governments might be more likely to focus on dealing with poverty if they weren’t being helped by charities

Charity may benefit the state rather than the needy

It has been argued that charity can be self-defeating if it allows the state to escape some of its responsibilities.

So, the next time you put a coin in a charity tin you may want to ask yourself: Am I just helping the government cut services and is there something more useful I can do to save the world?