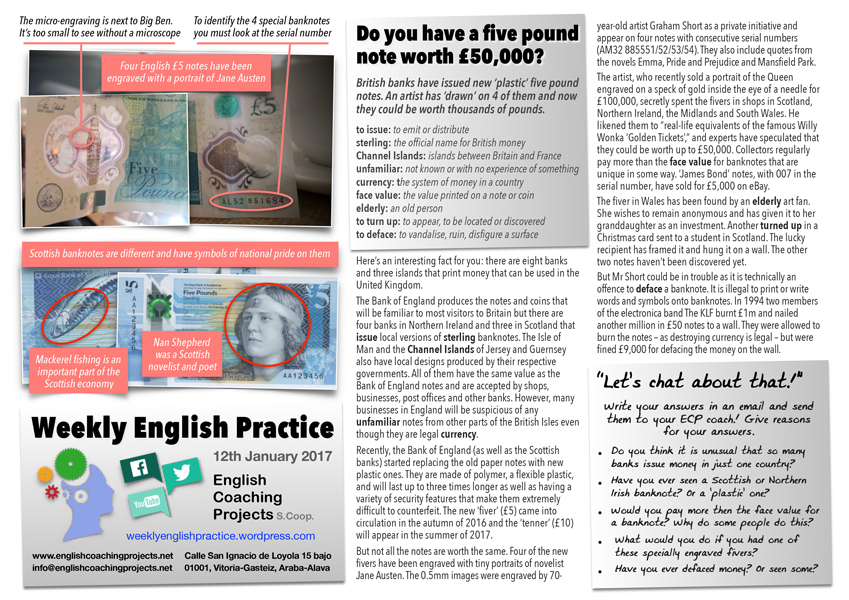 British banks have issued new ‘plastic’ five pound notes. An artist has ‘drawn’ on 4 of them and now they could be worth thousands of pounds.

to issue: to emit or distribute

unfamiliar: not known or with no experience of something

currency: the system of money in a country

face value: the value printed on a note or coin

to turn up: to appear, to be located or discovered

to deface: to vandalise, ruin, disfigure a surface

Here’s an interesting fact for you: there are eight banks and three islands that print money that can be used in the United Kingdom.

The Bank of England produces the notes and coins that will be familiar to most visitors to Britain but there are four banks in Northern Ireland and three in Scotland that issue local versions of sterling banknotes. The Isle of Man and the Channel Islands of Jersey and Guernsey also have local designs produced by their respective governments. All of them have the same value as the Bank of England notes and are accepted by shops, businesses, post offices and other banks. However, many businesses in England will be suspicious of any unfamiliar notes from other parts of the British Isles even though they are legal currency.

Recently, the Bank of England (as well as the Scottish banks) started replacing the old paper notes with new plastic ones. They are made of polymer, a flexible plastic, and will last up to three times longer as well as having a variety of security features that make them extremely difficult to counterfeit. The new ‘fiver’ (£5) came into circulation in the autumn of 2016 and the ‘tenner’ (£10) will appear in the summer of 2017.

But not all the notes are worth the same. Four of the new fivers have been engraved with tiny portraits of novelist Jane Austen. The 0.5mm images were engraved by 70-year-old artist Graham Short as a private initiative and appear on four notes with consecutive serial numbers (AM32 885551/52/53/54). They also include quotes from the novels Emma, Pride and Prejudice and Mansfield Park.

The artist, who recently sold a portrait of the Queen engraved on a speck of gold inside the eye of a needle for £100,000, secretly spent the fivers in shops in Scotland, Northern Ireland, the Midlands and South Wales. He likened them to “real-life equivalents of the famous Willy Wonka ‘Golden Tickets’,” and experts have speculated that they could be worth up to £50,000. Collectors regularly pay more than the face value for banknotes that are unique in some way. ‘James Bond’ notes, with 007 in the serial number, have sold for £5,000 on eBay.

The fiver in Wales has been found by an elderly art fan. She wishes to remain anonymous and has given it to her granddaughter as an investment. Another turned up in a Christmas card sent to a student in Scotland. The lucky recipient has framed it and hung it on a wall. The other two notes haven’t been discovered yet.

But Mr Short could be in trouble as it is technically an offence to deface a banknote. It is illegal to print or write words and symbols onto banknotes. In 1994 two members of the electronica band The KLF burnt £1m and nailed another million in £50 notes to a wall. They were allowed to burn the notes – as destroying currency is legal – but were fined £9,000 for defacing the money on the wall.