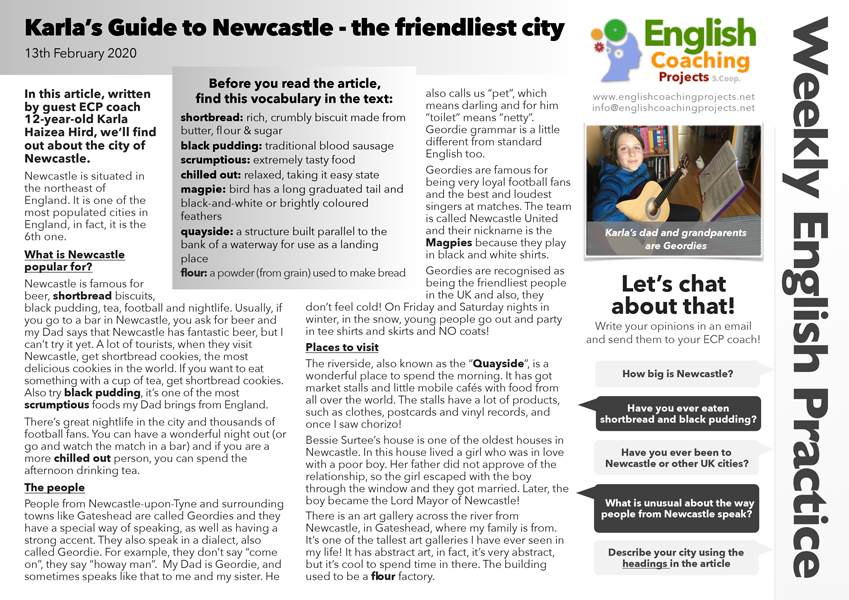 In this article, written by guest ECP coach 12-year-old Karla Haizea Hird, we’ll find out about the city of Newcastle.

magpie: bird has a long graduated tail and black-and-white or brightly coloured feathers

quayside: a structure built parallel to the bank of a waterway for use as a landing place

flour: a powder (from grain) used to make bread

In this article, written by guest ECP coach 12-year-old Karla Haizea Hird, we’ll find out about the city of Newcastle.

Newcastle is situated in the northeast of England. It is one of the most populated cities in England, in fact, it is the 6th one.

What is Newcastle popular for?

Newcastle is famous for beer, shortbread biscuits, black pudding, tea, football and nightlife. Usually, if you go to a bar in Newcastle, you ask for beer and my Dad says that Newcastle has fantastic beer, but I can’t try it yet. A lot of tourists, when they visit Newcastle, get shortbread cookies, the most delicious cookies in the world. If you want to eat something with a cup of tea, get shortbread cookies. Also try black pudding, it’s one of the most scrumptious foods my Dad brings from England.

There’s great nightlife in the city and thousands of football fans. You can have a wonderful night out (or go and watch the match in a bar) and if you are a more chilled out person, you can spend the afternoon drinking tea.

People from Newcastle-upon-Tyne and surrounding towns like Gateshead are called Geordies and they have a special way of speaking, as well as having a strong accent. They also speak in a dialect, also called Geordie. For example, they don’t say “come on”, they say “howay man”.  My Dad is Geordie, and sometimes speaks like that to me and my sister. He also calls us “pet”, which means darling and for him “toilet” means “netty”. Geordie grammar is a little different from standard English too.

Geordies are famous for being very loyal football fans and the best and loudest singers at matches. The team is called Newcastle United and their nickname is the Magpies because they play in black and white shirts.

Geordies are recognised as being the friendliest people in the UK and also, they don’t feel cold! On Friday and Saturday nights in winter, in the snow, young people go out and party in tee shirts and skirts and NO coats!

The riverside, also known as the “Quayside”, is a wonderful place to spend the morning. It has got market stalls and little mobile cafés with food from all over the world. The stalls have a lot of products, such as clothes, postcards and vinyl records, and once I saw chorizo!

Bessie Surtee’s house is one of the oldest houses in Newcastle. In this house lived a girl who was in love with a poor boy. Her father did not approve of the relationship, so the girl escaped with the boy through the window and they got married. Later, the boy became the Lord Mayor of Newcastle!

There is an art gallery across the river from Newcastle, in Gateshead, where my family is from. It’s one of the tallest art galleries I have ever seen in   my life! It has abstract art, in fact, it’s very abstract, but it’s cool to spend time in there. The building used to be a flour factory.