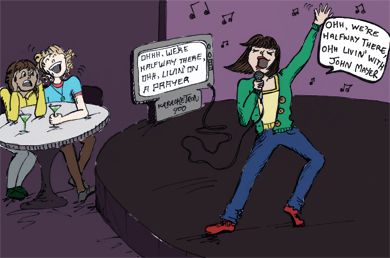 “She’s got a chicken to ride,” “Hold me closer, Tony Danza,” and “the ants are blowing in the wind” are all examples of mondegreens. That is not what the original artist is singing, although we may think it is.

botch: to carry out a task badly or carelessly

mishap: an unlucky event or accident

bungled: done very badly, in a careless or stupid way

shake a belief: to make someone doubt sth that they were certain was true

nonsensical: having no meaning, making no sense

There’s something consoling about web pages that collect ‘mondegreens’. Sites featuring these often hilarious examples of misheard song lyrics offer proof, at last, that botching the words to popular songs is a nearly universal human failing. Rest assured: a quick glance through the lyrical mishaps to be found on such sites is sure to reveal a mondegreen far sillier than any you have sung in the shower.

According to the word watcher William Safire of The New York Times, the term mondegreen dates from a 1954 magazine article by Sylvia Wright in which she said she had misheard the folk lyric ”and laid him on the green” as ”and Lady Mondegreen.” But it remained relatively obscure until its recent adoption by websites. The 1954 article employed the term to refer to any aural misinterpretation of a song, hymn, aphorism, advertising slogan and the like. But on the Net, it applies almost exclusively to misheard lyrics, especially in rock songs.

More than 1,300 bungled lyrics have been submitted by Web visitors to the mondegreen archive Kiss This Guy (www.kissthisguy.com). The name of the archive is taken from perhaps the most famous rock mondegreen of all: “‘scuse me while I kiss this guy” for “‘scuse me while I kiss the sky” from ‘Purple Haze’ by Jimi Hendrix. That mishearing has been so prevalent, legend has it, that Mr. Hendrix himself would occasionally stop and kiss a guy after singing this line in concert.

The more unintelligible the original lyrics, the more likely it is that listeners will hear what they want to hear — to invent their own meaning. Even though song lyrics are now easier than ever to check on web databases like the International Lyrics Server (www.lyrics.ch), it can be difficult to shake a belief in a mondegreen that someone has been singing for years. A survey at Kiss This Guy found that 77% of those who had submitted mondegreens believed their versions were better than the originals, and that 40% said they had convinced others that their lyrics were the correct ones.

And why not? Some mondegreens are no more nonsensical than the original words, and are often easier to sing. Having heard “clown control to Mao Zedong”, who wants to switch back to “ground control to Major Tom”?