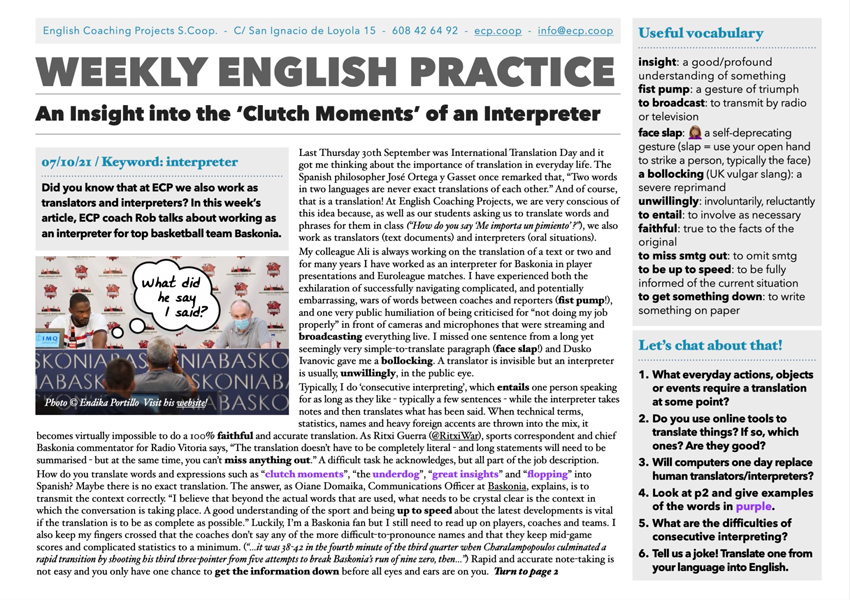 An Insight into the ‘Clutch Moments’ of an Interpreter

Did you know that at ECP we also work as translators and interpreters? In this week’s article, ECP coach Rob talks about working as an interpreter for top basketball team Baskonia.

insight: a good/profound understanding of something

fist pump: a gesture of triumph

to broadcast: to transmit by radio or television

face slap: ????????‍♀️ a self-deprecating gesture (slap = use your open hand to strike a person, typically the face)

to entail: to involve as necessary

faithful: true to the facts of the original

to be up to speed: to be fully informed of the current situation

to get something down: to write something on paper

Did you know that at ECP we also work as translators and interpreters? In this week’s article, ECP coach Rob talks about working as an interpreter for top basketball team Baskonia.

Last Thursday 30th September was International Translation Day and it got me thinking about the importance of translation in everyday life. The Spanish philosopher José Ortega y Gasset once remarked that, “Two words in two languages are never exact translations of each other.” And of course, that is a translation! At English Coaching Projects, we are very conscious of this idea because, as well as our students asking us to translate words and phrases for them in class (“How do you say ‘Me importa un pimiento’ ?”), we also work as translators (text documents) and interpreters (oral situations).

My colleague Ali is always working on the translation of a text or two and for many years I have worked as an interpreter for Baskonia in player presentations and Euroleague matches. I have experienced both the exhilaration of successfully navigating complicated, and potentially embarrassing, wars of words between coaches and reporters (fist pump!), and one very public humiliation of being criticised for “not doing my job properly” in front of cameras and microphones that were streaming and broadcasting everything live. I missed one sentence from a long yet seemingly very simple-to-translate paragraph (face slap!) and Dusko Ivanovic gave me a bollocking. A translator is invisible but an interpreter is usually, unwillingly, in the public eye.

Typically, I do ‘consecutive interpreting’, which entails one person speaking for as long as they like – typically a few sentences – while the interpreter takes notes and then translates what has been said. When technical terms, statistics, names and heavy foreign accents are thrown into the mix, it becomes virtually impossible to do a 100% faithful and accurate translation. As Ritxi Guerra (@RitxiWar), sports correspondent and chief Baskonia commentator for Radio Vitoria says, “The translation doesn’t have to be completely literal – and long statements will need to be summarised – but at the same time, you can’t miss anything out.” A difficult task he acknowledges, but all part of the job description.

How do you translate words and expressions such as “clutch moments”, “the underdog”, “great insights” and “flopping” into Spanish? Maybe there is no exact translation. The answer, as Oiane Domaika, Communications Officer at Baskonia, explains, is to transmit the context correctly. “I believe that beyond the actual words that are used, what needs to be crystal clear is the context in which the conversation is taking place. A good understanding of the sport and being up to speed about the latest developments is vital if the translation is to be as complete as possible.” Luckily, I’m a Baskonia fan but I still need to read up on players, coaches and teams. I also keep my fingers crossed that the coaches don’t say any of the more difficult-to-pronounce names and that they keep mid-game scores and complicated statistics to a minimum. (“…it was 38-42 in the fourth minute of the third quarter when Charalampopoulos culminated a rapid transition by shooting his third three-pointer from five attempts to break Baskonia’s run of nine zero, then…”) Rapid and accurate note-taking is not easy and you only have one chance to get the information down before all eyes and ears are on you.

Over the years, I have been interrupted, corrected, criticised, thanked and congratulated. I often check the YouTube recording of the press conferences later and, as a perfectionist, I have to admit that I’ve seen moments when I could have done a better job. “An imprecise or incomplete translation is the worst thing an interpreter can do,” warns Ritxi Guerra.

But, we learn from our mistakes, right? So let’s finish with another observation from José Ortega y Gasset: “El verdadero tesoro del hombre es el tesoro de sus errores.” How would you translate that?

Let’s chat about being an interpreter!

Why Humour Is The Hardest Thing To Translate