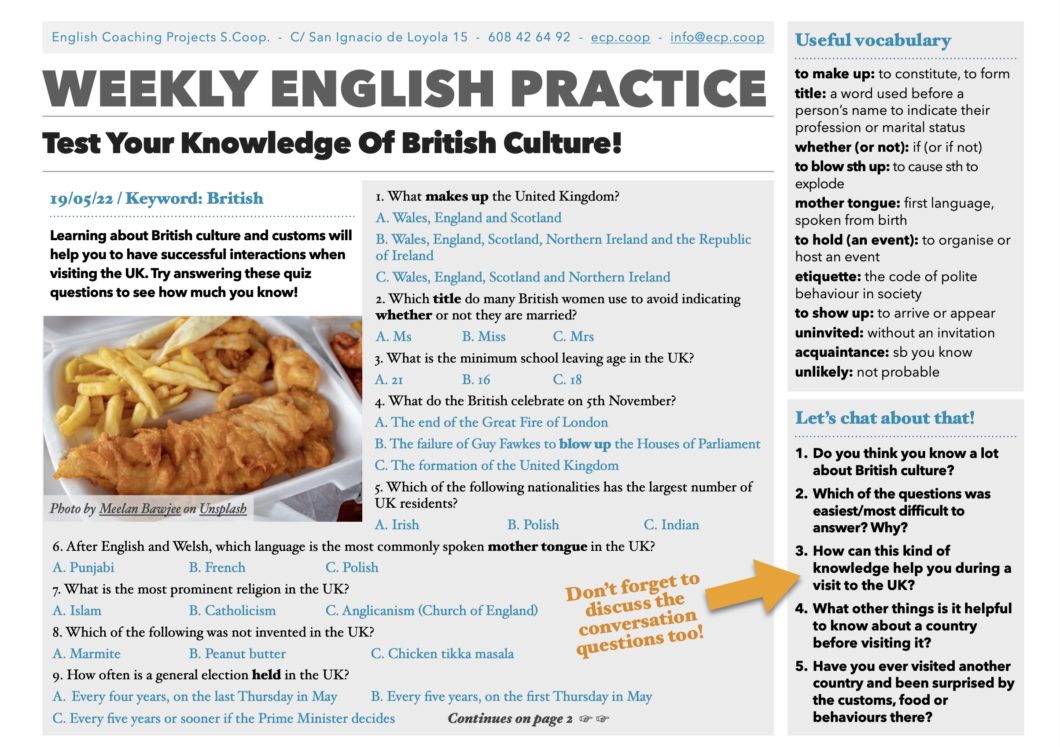 Test Your Knowledge of British Culture!

Learning about British culture and customs will help you to have successful interactions when visiting the UK. Try answering these quiz questions to see how much you know!

to make up: to constitute, to form

title: a word used before a person’s name to indicate their profession or marital status

to blow sth up: to cause sth to explode

to hold (an event): to organise or host an event

etiquette: the code of polite behaviour in society

to show up: to arrive or appear

uninvited: without an invitation

Test Your Knowledge of British Culture!

Learning about British culture and customs will help you to have successful interactions when visiting the UK. Try answering these quiz questions to see how much you know!

1. What makes up the United Kingdom?

A. Wales, England and Scotland

B. Wales, England, Scotland, Northern Ireland and the Republic of Ireland

2. Which title do many British women use to avoid indicating whether or not they are married?

3. What is the minimum school leaving age in the UK?

4. What do the British celebrate on 5th November?

A. The end of the Great Fire of London

B. The failure of Guy Fawkes to blow up the Houses of Parliament

C. The formation of the United Kingdom

5. Which of the following nationalities has the largest number of UK residents?

A. Irish B. Polish C. Indian

6. After English and Welsh, which language is the most commonly spoken mother tongue in the UK?

A. Punjabi B. French C. Polish

7. What is the most prominent religion in the UK?

A. Islam B. Catholicism C. Anglicanism (Church of England)

8. Which of the following was not invented in the UK?

9. How often is a general election held in the UK?

A. Every four years, on the last Thursday in May

B. Every five years, on the first Thursday in May

C. Every five years or sooner if the Prime Minister decides

10. Which of the following is considered poor etiquette in the UK?

A. Eating lunch at your desk

B. Arriving 15 minutes late to a party

C. Showing up at someone’s house to say ‘hello’ uninvited

11. You bump into a business acquaintance who says “we should meet for a coffee soon”. What does this mean?

A. They expect you to contact them to arrange a time and place to meet

B. It’s unlikely that they will be in touch to arrange a coffee

C. They will probably contact you the following day to arrange to meet

Congratulations on finishing the quiz! Sadly, you’ll have to wait till next month, to find out how many answers you got right. For bonus points: can you name the dish in the photo on page 1?

Adapted by ECP coach Alison Keable, from a source that will be revealed along with the answers next month!

1. Do you think you know a lot about British culture?

2. Which of the questions was easiest / most difficult to answer? Why?

3. How can this kind of knowledge help you during a visit to the UK?

4. What other things is it helpful to know about a country before visiting it?

5. Have you ever visited another country and been surprised by the customs, food or behaviours there?