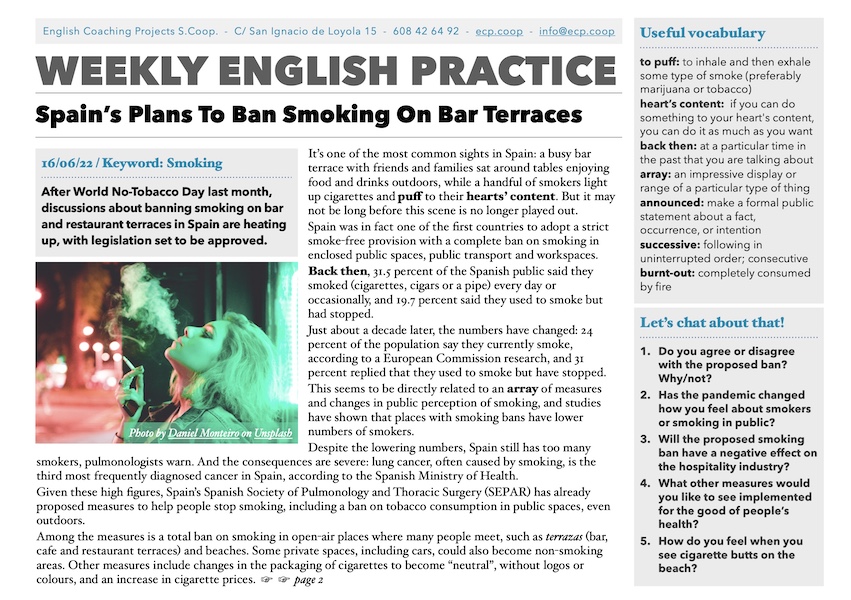 After World No-Tobacco Day last month, discussions about banning smoking on bar and restaurant terraces in Spain are heating up, with legislation set to be approved.

to puff: to inhale and then exhale some type of smoke (preferably marijuana or tobacco)

back then: at a particular time in the past that you are talking about

array: an impressive display or range of a particular type of thing

announced: make a formal public statement about a fact, occurrence, or intention

After World No-Tobacco Day last month, discussions about banning smoking on bar and restaurant terraces in Spain are heating up, with legislation set to be approved.

It’s one of the most common sights in Spain: a busy bar terrace with friends and families sat around tables enjoying food and drinks outdoors, while a handful of smokers light up cigarettes and puff to their hearts’ content. But it may not be long before this scene is no longer played out.

Spain was in fact one of the first countries to adopt a strict smoke-free provision with a complete ban on smoking in enclosed public spaces, public transport and workspaces.

Back then, 31.5 percent of the Spanish public said they smoked (cigarettes, cigars or a pipe) every day or occasionally, and 19.7 percent said they used to smoke but had stopped.

Just about a decade later, the numbers have changed: 24 percent of the population say they currently smoke, according to a European Commission research, and 31 percent replied that they used to smoke but have stopped.

This seems to be directly related to an array of measures and changes in public perception of smoking, and studies have shown that places with smoking bans have lower numbers of smokers.

Despite the lowering numbers, Spain still has too many smokers, pulmonologists warn. And the consequences are severe: lung cancer, often caused by smoking, is the third most frequently diagnosed cancer in Spain, according to the Spanish Ministry of Health.

Given these high figures, Spain’s Spanish Society of Pulmonology and Thoracic Surgery (SEPAR) has already proposed measures to help people stop smoking, including a ban on tobacco consumption in public spaces, even outdoors.

Among the measures is a total ban on smoking in open-air places where many people meet, such as terrazas (bar, cafe and restaurant terraces) and beaches. Some private spaces, including cars, could also become non-smoking areas. Other measures include changes in the packaging of cigarettes to become “neutral”, without logos or colours, and an increase in cigarette prices.

The proposed smoking laws announced by the Health Ministry, which were expected to come into force in 2021, are still delayed. Successive health emergencies – from the coronavirus pandemic to recent cases of child hepatitis and monkeypox – have delayed the plans.

Spain’s Cancer Association (AECC) highlights that the measures would significantly protect young people, as well as the population in general, by reducing risk factors that can cause cancer.

According to data from AECC, in 95 percent of the terraces in Spain, traces of damaging substances in tobacco can be found. The same is true in 46 percent of school access areas or 43 percent of playgrounds, the association says. Moreover, a burnt-out cigarette butt continues to give off 14 percent nicotine for at least 24 hours.

1. Do you agree or disagree  with the proposed ban? Why/not?

2. Has the pandemic changed how you feel about smokers or smoking in public?

3. Will the proposed smoking ban have a negative effect on the hospitality industry?

4. What other measures would you like to see implemented for the good of people’s health?

5. How do you feel when you see cigarette butts on the beach?