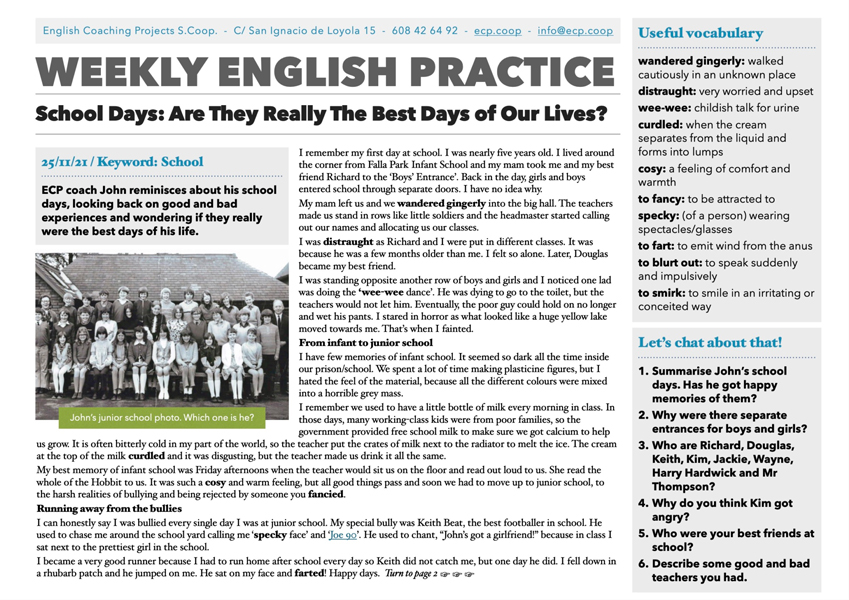 School Days: Are They Really The Best Days of Our Lives?

ECP coach John reminisces about his school days, looking back on good and bad experiences and wondering if they really were the best days of his life.

curdled: when the cream separates from the liquid and forms into lumps

cosy: a feeling of comfort and warmth

to fancy: to be attracted to

specky: (of a person) wearing spectacles/glasses

to fart: to emit wind from the anus

to blurt out: to speak suddenly and impulsively

to smirk: to smile in an irritating or conceited way

ECP coach John reminisces about his school days, looking back on good and bad experiences and wondering if they really were the best days of his life.

I remember my first day at school. I was nearly five years old. I lived around the corner from Falla Park Infant School and my mam took me and my best friend Richard to the ‘Boys’ Entrance’. Back in the day, girls and boys entered school through separate doors. I have no idea why.

My mam left us and we wandered gingerly into the big hall. The teachers made us stand in rows like little soldiers and the headmaster started calling out our names and allocating us our classes.

I was distraught as Richard and I were put in different classes. It was because he was a few months older than me. I felt so alone. Later, Douglas became my best friend.

I was standing opposite another row of boys and girls and I noticed one lad was doing the ‘wee-wee dance’. He was dying to go to the toilet, but the teachers would not let him. Eventually, the poor guy could hold on no longer and wet his pants. I stared in horror as what looked like a huge yellow lake moved towards me. That’s when I fainted.

From infant to junior school

I have few memories of infant school. It seemed so dark all the time inside our prison/school. We spent a lot of time making plasticine figures, but I hated the feel of the material, because all the different colours were mixed into a horrible grey mass.

I remember we used to have a little bottle of milk every morning in class. In those days, many working-class kids were from poor families, so the government provided free school milk to make sure we got calcium to help us grow. It is often bitterly cold in my part of the world, so the teacher put the crates of milk next to the radiator to melt the ice. The cream at the top of the milk curdled and it was disgusting, but the teacher made us drink it all the same.

My best memory of infant school was Friday afternoons when the teacher would sit us on the floor and read out loud to us. She read the whole of the Hobbit to us. It was such a cosy and warm feeling, but all good things pass and soon we had to move up to junior school, to the harsh realities of bullying and being rejected by someone you fancied.

Running away from the bullies

I can honestly say I was bullied every single day I was at junior school. My special bully was Keith Beat, the best footballer in school. He used to chase me around the school yard calling me ‘specky face’ and ‘Joe 90’. He used to chant, “John’s got a girlfriend!” because in class I sat next to the prettiest girl in the school.

I became a very good runner because I had to run home after school every day so Keith did not catch me, but one day he did. I fell down in a rhubarb patch and he jumped on me. He sat on my face and farted! Happy days.  Turn to page 2 ☞ ☞ ☞

Even though I sat next to the prettiest girl in school, Kim Rodgers, I was very shy and she didn’t know I fancied her, as the fullness of my feeling was never made clear. I thought she didn’t like me at all.

However, the drama teacher Mr Thompson saw something in me and encouraged me to audition for the school Nativity play and I got the lead part. It was a modern take on the Bethlehem story and I had my first stage kiss.

Kim started acting strangely and one day blurted out, “you can kiss Jackie in the play, but you won’t kiss me!” It was a lesson well learned. If you like someone, you should tell them. Nothing to lose.

The head teacher Mr. Hardwick was an adult bully, the worst kind. In my day, corporal punishment was still allowed and he used to whack children with a bamboo cane in front of his office, for trivial offences. One day we were playing football in the playground and the bell rang to return to class, but one big boy called Wayne refused and he continued to kick a ball against the wall. Hardwick got really angry and dragged Wayne by the ear into the school hall. He ordered the teachers to line up the whole school and make us watch as he sadistically beat the boy. Wayne just smirked as Hardwick told him to bend over. “Whack!” No reaction from Wayne. “Whack!” Nothing again. Hardwick’s face was red with anger as he hit him again, but this time the cane broke and Wayne stood up triumphantly. The whole school started laughing and cheering, including the teachers, and Hardwick stormed off to his study, humiliated. It was our school revolution!

Years later, Mr Thompson told me the young teachers were also bullied by the head teacher because they tried to stand up for us and help us. As kids we thought the teachers were so old, but in reality, they were only in their 20s! We didn’t realise they were looking out for us and protecting us from the old authoritative education system of the past.

Were my school days the best days of my life? They certainly weren’t the worst! I learned to read and write, to act and sing and play musical instruments. I learned to think for myself, fight the power and not be afraid to love. Most of all, reminiscing about my school days helps me realise what a good teacher is. Our best teachers back then cared about us as individuals and encouraged us to develop our talents. I can only try to do the same today and I hope I do.

How To Create A Summer To Remember