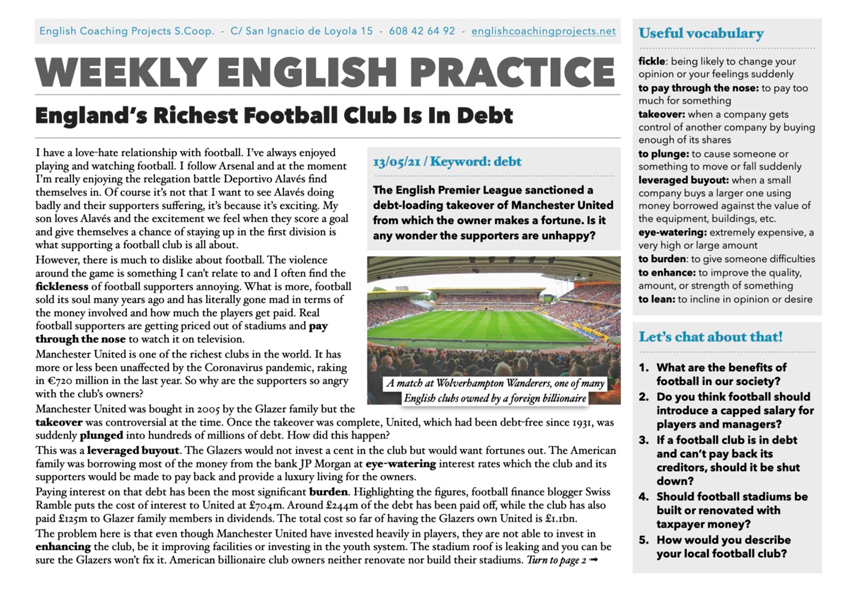 The English Premier League sanctioned a debt-loading takeover of Manchester United from which the owner makes a fortune. Is it any wonder the supporters are unhappy?

fickle: being likely to change your opinion or your feelings suddenly

to pay through the nose: to pay too much for something

takeover: when a company gets control of another company by buying enough of its shares

to plunge: to cause someone or something to move or fall suddenly

leveraged buyout: when a small company buys a larger one using money borrowed against the value of the equipment, buildings, etc.

to burden: to give someone difficulties

to enhance: to improve the quality, amount, or strength of something

to lean: to incline in opinion or desire

The English Premier League sanctioned a debt-loading takeover of Manchester United from which the owner makes a fortune. Is it any wonder the supporters are unhappy?

I have a love-hate relationship with football. I’ve always enjoyed playing and watching football. I follow Arsenal and at the moment I’m really enjoying the relegation battle Deportivo Alavés find themselves in. Of course it’s not that I want to see Alavés doing badly and their supporters suffering, it’s because it’s exciting. My son loves Alavés and the excitement we feel when they score a goal and give themselves a chance of staying up in the first division is what supporting a football club is all about.

However, there is much to dislike about football. The violence around the game is something I can’t relate to and I often find the fickleness of football supporters annoying. What is more, football sold its soul many years ago and has literally gone mad in terms of the money involved and how much the players get paid. Real football supporters are getting priced out of stadiums and pay through the nose to watch it on television.

Manchester United is one of the richest clubs in the world. It has more or less been unaffected by the Coronavirus pandemic, raking in €720 million in the last year. So why are the supporters so angry with the club’s owners?

Manchester United was bought in 2005 by the Glazer family but the takeover was controversial at the time. Once the takeover was complete, United, which had been debt-free since 1931, was suddenly plunged into hundreds of millions of debt. How did this happen?

This was a leveraged buyout. The Glazers would not invest a cent in the club but would want fortunes out. The American family was borrowing most of the money from the bank JP Morgan at eye-watering interest rates which the club and its supporters would be made to pay back and provide a luxury living for the owners.

Paying interest on that debt has been the most significant burden. Highlighting the figures, football finance blogger Swiss Ramble puts the cost of interest to United at £704m. Around £244m of the debt has been paid off, while the club has also paid £125m to Glazer family members in dividends. The total cost so far of having the Glazers own United is £1.1bn.

The problem here is that even though Manchester United have invested heavily in players, they are not able to invest in enhancing the club, be it improving facilities or investing in the youth system. The stadium roof is leaking and you can be sure the Glazers won’t fix it. American billionaire club owners neither renovate nor build their stadiums. Turn to page 2 ➟

The tax payer does. Dynasties who amassed fortunes through capitalism lean suddenly and conveniently socialist when it comes to investing in bricks and mortar. Between 1997 and 2017, $7bn in local tax revenue went to constructing or refurbishing stadiums owned by some of the richest families in America. What is even more worrying is that if they don’t get what they want, they will up-sticks and move the club to another city if the council there is willing to build them a better stadium.

Many supporters have always believed that the throwing of the clubs to the corporate takeover market was wrong for football culture and Man Utd fans’ opposition to the Glazers seems to be well-founded.

Let’s chat about football and debt!

Squash is the Healthiest Sport