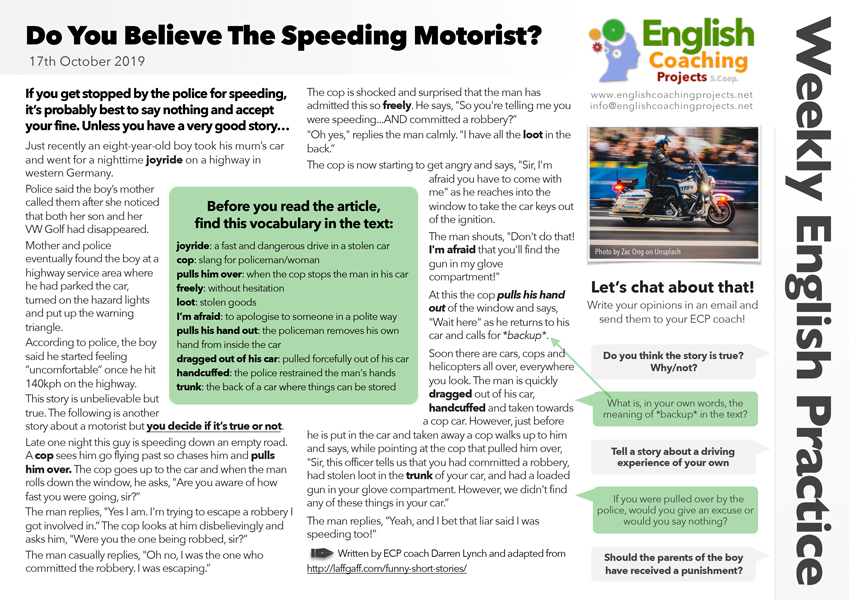 In this week’s Weekly English Practice you have to decide if some stories are true or false. Watch, listen, read and decide!

If you get stopped by the police for speeding, it’s probably best to say nothing and accept your fine. Unless you have a very good story…

joyride: a fast and dangerous drive in a stolen car

pulls him over: when the cop stops the man in his car

I’m afraid: to apologise to someone in a polite way

pulls his hand out: the policeman removes his own hand from inside the car

trunk: the back of a car where things can be stored

Just recently an eight-year-old boy took his mum’s car and went for a nighttime joyride on a highway in western Germany.

Police said the boy’s mother called them after she noticed that both her son and her VW Golf had disappeared.

Mother and police eventually found the boy at a highway service area where he had parked the car, turned on the hazard lights and put up the warning triangle.

According to police, the boy said he started feeling “uncomfortable” once he hit 140kph on the highway.

This story is unbelievable but true. The following is another story about a motorist but you decide if it’s true or not.

Late one night this guy is speeding down an empty road. A cop sees him go flying past so chases him and pulls him over. The cop goes up to the car and when the man rolls down the window, he asks, “Are you aware of how fast you were going, sir?”

The man replies, “Yes I am. I’m trying to escape a robbery I got involved in.” The cop looks at him disbelievingly and asks him, “Were you the one being robbed, sir?”

The man casually replies, “Oh no, I was the one who committed the robbery. I was escaping.”

The cop is shocked and surprised that the man has admitted this so freely. He says, “So you’re telling me you were speeding…AND committed a robbery?”

“Oh yes,” replies the man calmly. “I have all the loot in the back.”

The cop is now starting to get angry and says, “Sir, I’m afraid you have to come with me” as he reaches into the window to take the car keys out of the ignition.

The man shouts, “Don’t do that! I’m afraid that you’ll find the gun in my glove compartment!”

At this the cop pulls his hand out of the window and says, “Wait here” as he returns to his car and calls for *backup*.

Soon there are cars, cops and helicopters all over, everywhere you look. The man is quickly dragged out of his car, handcuffed and taken towards a cop car. However, just before he is put in the car and taken away a cop walks up to him and says, while pointing at the cop that pulled him over, “Sir, this officer tells us that you had committed a robbery, had stolen loot in the trunk of your car, and had a loaded gun in your glove compartment. However, we didn’t find any of these things in your car.”

The man replies, “Yeah, and I bet that liar said I was speeding too!”

Written by ECP coach Darren Lynch and adapted from http://laffgaff.com/funny-short-stories/