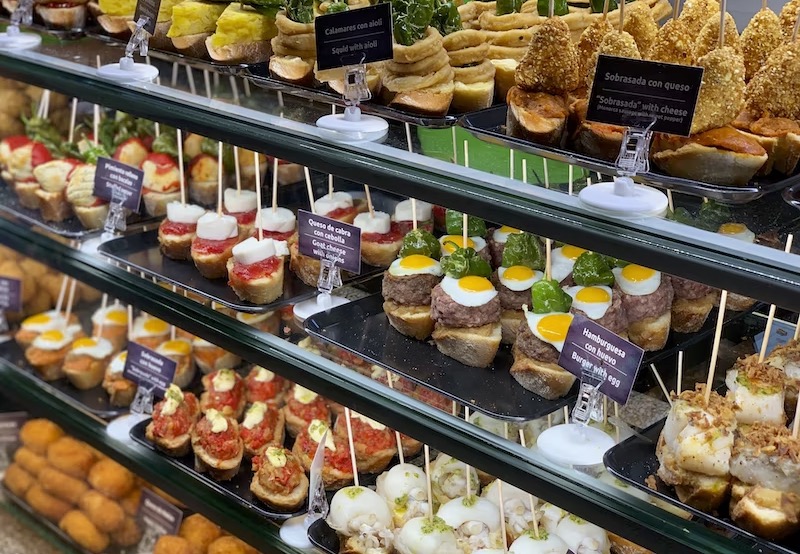 In this week’s WEP, Kez relates three possible origins of the tiny, tasty treat known here in the Basque Country as a ‘pintxo’, but in Spain and around the world as ‘tapas’.

treat: something which isn’t ordinary and gives great pleasure

greasy: covered with, resembling or produced by oil

whet your appetite: to induce or increase one’s interest in something

reign: the period of rule of a monarch

beverage: a drink other than water (usually brewed)

entourage: a group around an important person

innkeeper: a person who runs an inn (pub)

to flap (flapping): to move wings up and down

sausage: a cylindrical length of minced meat, encased in a skin, often sold raw to be cooked before eating

englishcoachingprojects · Where Do Tapas Come From?

Where do ‘tapas’ come from?

Tapas are so characteristically typical of Spanish gastronomy – almost as much as Iberian ham. There are many differing types (from elaborate to simple, and light to greasy). However, they all have something in common: they whet your appetite and etch a smile on your face.  How much do you know about the origin of tapas?

Contrary to what you may believe, they’re not an invention from this century. Like many phenomenon with a long history, there are various theories about the origin of tapas. In this article, we’ll look at just three of them, going from the oldest to the most recent.

Story 1: Alfonso X ‘the Wise’ and his illness

The first version takes us back to the 13th century, during the reign of Alfonso X ‘the Wise’. During his rule, the King suffered from an illness and was advised to take several sips of wine between meals. The wise monarch listened to his doctor, but decided to have a small amount of food with his drink in order to counteract the effects of the alcohol. Once he was better, he announced a law which ordered all the taverns in Castile to serve something solid for people to put into their stomachs along with the wine so that it would cover up (tapar) the least wanted effects of this beverage.

Story 2: The Catholic Monarchs on their journey to Andalusia

A couple of centuries later, a second theory leads us to the era of the Catholic Monarchs. The rulers found themselves on the way to Andalusia when King Ferdinand II of Aragon decided to take a break along the journey, with all his entourage stopping in a tavern that was full of flies. The innkeeper, embarrassed by the situation and worried that an insect might end up flapping around inside the royal glass, decided to put this unusual ‘tapa’ on top of it: a slice of sausage, delivering the following words: “Here is your ‘tapa’, Your Majesty”.

Not all these theories are linked to royalty. There is also a version connected to simple village life, and in particular, to the workers. We find ourselves in the 19th century, when fieldworkers made it fashionable to have a few swigs of wine alongside a bit of food during their long, hard working days, thus avoiding large, heavy meals which would prevent them from carrying out their tasks.

As you can see, there can be many beliefs surrounding the origins of something as common as tapas. From their beginnings, they’re known to have consisted of slices of sausage accompanied by a drink. Nevertheless, they have evolved over the years, offering truly surprising creations.

Translated from this page by ECP coach Darren ‘Kez’ Kurien