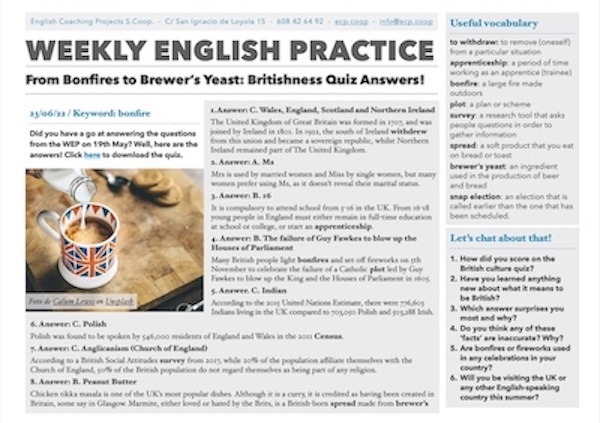 Did you have a go at answering the questions from the WEP on 19th May? Well, here are the answers! Click here to download the quiz.

to withdraw: to remove (oneself) from a particular situation
apprenticeship: a period of time working as an apprentice (trainee)
bonfire: a large fire made outdoors
plot: a plan or scheme
survey: a research tool that asks people questions in order to gather information
spread: a soft product that you eat on bread or toast
brewer’s yeast: an ingredient used in the production of beer and bread
snap election: an election that is called earlier than the one that has been scheduled

Did you have a go at answering the questions from the WEP on 19th May? Well, here are the answers! Click here to download the quiz.

The United Kingdom of Great Britain was formed in 1707, and was joined by Ireland in 1801. In 1922, the south of Ireland withdrew from this union and became a sovereign republic, whilst Northern Ireland remained part of The United Kingdom.

Mrs is used by married women and Miss by single women, but many women prefer using Ms, as it doesn’t reveal their marital status.

It is compulsory to attend school from 5-16 in the UK. From 16-18 young people in England must either remain in full-time education at school or college, or start an apprenticeship.

4. Answer: B. The failure of Guy Fawkes to blow up the Houses of Parliament

Many British people light bonfires and set off fireworks on 5th November to celebrate the failure of a Catholic plot led by Guy Fawkes to blow up the King and the Houses of Parliament in 1605.

According to a British Social Attitudes survey from 2017, while 20% of the population affiliate themselves with the Church of England, 50% of the British population do not regard themselves as being part of any religion.

Chicken tikka masala is one of the UK’s most popular dishes. Although it is a curry, it is credited as having been created in Britain, some say in Glasgow. Marmite, either loved or hated by the Brits, is a British-born spread made from brewer’s yeast.

9. Answer: B. Every five years, on the first Thursday in May

General elections take place every five years. Since the Fixed-term Parliaments Act 2011, the Prime Minister cannot call a ‘snap’ election without a two-thirds majority in a parliamentary vote.

The British tend to value their privacy, so appearing on someone’s doorstep unexpectedly can be taken as an invasion of this privacy. It is always better to let somebody know you’re visiting them before knocking on their door!

Bonus question: The dish on page 1 of the quiz in May was of course fish ’n’ chips.

Adapted from this quiz by ECP coach Alison Keable

1. How did you score on the British culture quiz?

2. Have you learned anything new about what it means to be British?

3. Which answer surprises you most and why?

4. Do you think any of these ‘facts’ are inaccurate? Why?

5. Are bonfires or fireworks used in any celebrations in your country?

6. Will you be visiting the UK or any other English-speaking country this summer?